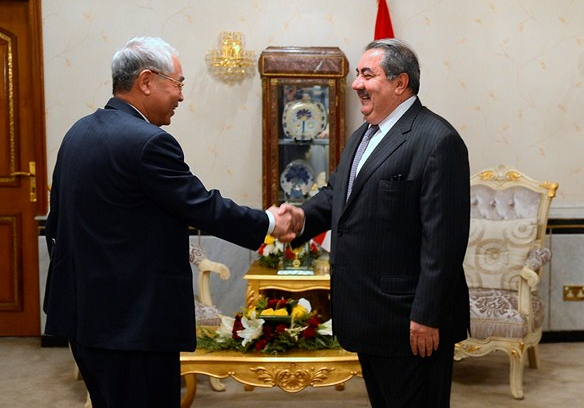 Foreign Minister Hoshyar Zebari has met the Ambassador of the People's Republic of China, Wang Yong.

The Minister confirmed Iraq's participation in the Fourth Summit of the Conference on Interaction and Confidence-Building Measures in the Asia States to be held in Shanghai, China. Iraq participates in the conference with a delegation comprising Undersecretary for Policy Planning and senior officials in the Ministry. It is worth mentioning that Iraq is a member of this conference which includes 24 Asian countries.

The Minister stressed the government's keenness to enhance the distinguished bilateral relations, confirming the participation of Iraq in the sixth session of the Ministerial Meeting of the Arab – Chinese Cooperation Forum, which will be held in Beijing early next June.

The meeting was attended by Undersecretary for Legal Affairs and Multilateral Relations, Acting Head of the Protocol Department, and Deputy Head of Asia Department.