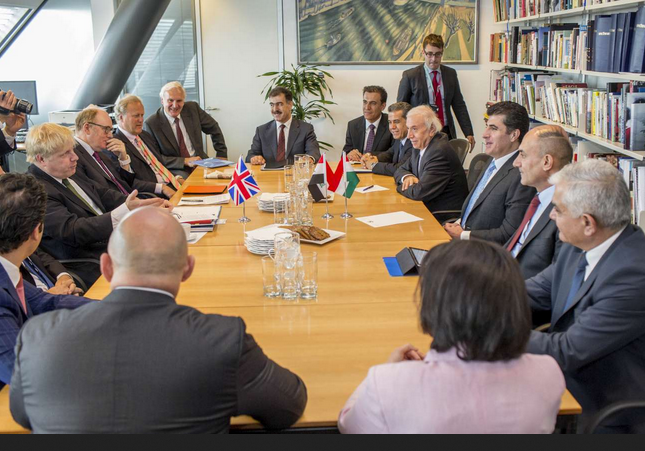 Prime Minister Nechirvan Barzani yesterday continued discussions on deepening Kurdistan-UK relations in meetings with the Mayor of London, Boris Johnson, the British Minister of State for International Development, Alan Duncan, and the British Parliamentary Under Secretary of State for Transport, Robert Goodwill.

In each meeting officials from both sides emphasised the importance of exploring new avenues for cooperation and bolstering the mutually beneficial relationship that already exists between Kurdistan and the United Kingdom. The meetings took place on the second day of Prime Minister Barzani's first official visit to Britain. He was accompanied by several of his ministers, officials and advisers.

Mayor Johnson welcomed the Prime Minister and his delegation and said that the visit would serve as a good opportunity to further relations between the cities of London and Erbil as well as Britain and the Kurdistan Region. The Prime Minister discussed the growing opportunities for business and investment in Kurdistan, describing the current economic boom as a new chapter after decades of economic neglect. Both sides noted the many areas in which Erbil can learn from London's experience as a global capital and a leading financial hub.

Prime Minister Barzani pointed to the value of direct relations between the city administrations of Erbil and London, extending to Mayor Johnson an official invitation to visit Erbil with a delegation of companies interested in operating in Kurdistan. The Prime Minister said that British companies with expertise in tourism, infrastructure development, oil and gas, financial services, and other sectors would find great opportunities in Kurdistan, as would investors.

Meeting with Under Secretary for Transport Robert Goodwill

The Prime Minister's meeting with Under Secretary for Transport Robert Goodwill focused on cooperation and coordination in the fields of transport and communication - specifically the importance of launching direct flights between London and Kurdistan. Both sides agreed upon the importance of such flights for enhancing economic and cultural relations. Mechanisms to prepare for direct flights were discussed in detail.

Meeting with Minister of State for International Development Alan Duncan

The last meeting of Prime Minister Barzani’s visit to the United Kingdom was with Minister of State for International Development Alan Duncan. Both sides discussed the current situation in the region as a whole as well as the situation of the internally displaced persons who have fled to the Kurdistan Region from other provinces of Iraq. They also discussed the Syrian refugees in Kurdistan and the level of assistance and services provided to refugees by the KRG. ‎Minister Duncan praised the efforts of the KRG in welcoming and accommodating these refugees in addition to providing them with aid, health and education services.

Prime Minister Barzani asked the Minister of State for International Development to encourage British and international charitable and non-governmental organisations to increase their operations in Kurdistan to provide refugees and internally displaced persons with humanitarian aid in coordination with the Kurdistan Region Government. The amount of external aid currently provided does not match the needs of refugees, as the Iraqi federal government has contributed little aid. The KRG has provided millions of dollars in assistance and in-kind support, including housing hundreds of thousands of refugees, an effort warmly noted by Minister Duncan.