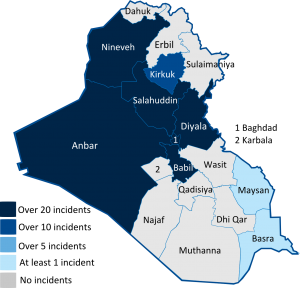 On 15 July, Iraqi MPs took the first formal step toward forming a new government, by electing Salim al-Juburi, a Sunni lawmaker, as the new speaker of parliament. Negotiations between the main parliamentary blocs had been in gridlock since the April elections failed to produce a majority, with sessions adjourned or boycotted by the main protagonists. This vote comes as central authorities face mounting pressure from the international community to form a government capable of addressing the root causes of the ISIS insurgency. Despite these movements, the nomination of a parliament speaker is tempered by the fact that the designation of a new Prime Minister, who concentrates most decision-making powers, is unlikely to bring a similar consensus among the competing factions. The participation of the Kurdish factions in the electoral process also demonstrates that the Kurdish leadership remains cautious and currently seems determined to exploit opportunities available within the existing political framework. The next step toward forming a government is the election of the President, expected to be a Kurd, and which should ensure the continued involvement of Kurdish blocs in the Iraqi political process. Meanwhile, the KRG continued to take steps toward economic autonomy. On 11 June, Peshmerga forces seized control of production facilities at the Kirkuk and Bai Hassan oil fields, expelling Iraqi employees. The nomination of Juburi hardly reflected progress on the ground however, with the ISF counter-offensive launched in the North in a bid to re-take Tikrit failing to produce the expected results. Tribal alliances on the ground have the potential to shift rapidly and their negotiation will be key to the ISF to making permanent gains in ISIS-controlled territories.

Most of the violence reported in the North remained concentrated in northern Salahuddin, where ISF units are attempting to regain control of Tikrit. Additional hotspots for violence include southern areas of Kirkuk and northern districts of Diyala, with firefights between ISF and ISIS reported in Muqdadiyah. On 14 July, the ISF attempted to re-take control of the Amreli area of eastern Tikrit, following a two-week long counter-offensive on the Baathist stronghold. Although the ISF appears to have consolidated its positions in the outskirts of Tikrit and is now able to launch regular assaults on the area, claims that the Iraqi Army has managed to expel insurgents from Tikrit are an overstatement and the town is expected to remain disputed over the next weeks. In a possible attempt at alleviating the pressure on Tikrit, ISIS launched an assault on Dhululiya in the southeast of Samarra, and reportedly controls 40 percent of the town after two days of ongoing clashes. The rest of the town is controlled by local tribes and the ISF does not currently have a presence there, though units are expected to reach the area in the coming days. As appears to be demonstrated by ongoing reports from the ground, the concentration of military resources on Tikrit may lead to further ISIS gains south of Samarra. Meanwhile, the lack of local support for Iraqi forces in Tikrit is unlikely to lead to a major breakthrough, though an escalation in direct fighting between Iraqi troops and ISIS fighters is expected. 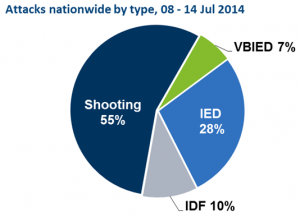 As assessed in previous reports, the situation in central provinces remained stagnant this week, with most ISF operations on the western front focussed on targeting neighbourhoods of Fallujah, and major interactions between Iraqi soldiers and ISIS reported in Haditha and Ramadi. On 13 July, an assault organised by ISIS fighters and supported with military vehicles, was met by forces consisting of ISF, volunteers and tribal elements. The attack resulted in dozens of casualties. Meanwhile, levels of violence in Baghdad remained consistent with previous weekly averages, with attacks involving car bombs relatively scarce and confined to the outer borders of the capital, failing to inflict heavy losses. Eastern districts remained the most exposed to ISIS violence. On 12 June, unidentified gunmen stormed a residential complex in the capital’s Zayuna neighbourhood and killed over 30 civilians. The attack, which targeted apartments allegedly used as a brothel, may have been staged by Shia militias, whose role has become increasingly active in the capital following the collapse of armed forces in the North. Stagnating dynamics on the ground mean that the nature and frequency of attacks will remain similar over the next weeks.

The concentration of military resources in the North continued to provide ISIS cells with opportunities to strike areas south of Baghdad. Levels of violence in Babil continued to increase in frequency, demonstrating a continued commitment to weaken Baghdad’s southern belt. On 09 July, a VBIED struck Hillah’s northern neighbourhood of Jaza’ir, followed by the detonation of two additional car bombs in Mahawil district, northern Babil, killing at least 11 people. Ongoing ISF operations in the North have impacted on ISIS tactics, with attacks on Babil seen as a means to alleviate the pressure currently put on ISIS positions on the northern frontline. South-eastern provinces remain assessed as a low priority for insurgents, who are already engaged on multiple fronts across the country. The upcoming Shia festival celebrating the martyrdom of Imam Ali on 19 July nonetheless has the potential to trigger militant assaults on civilians, as pilgrims are expected to converge on Karbala over the next days. 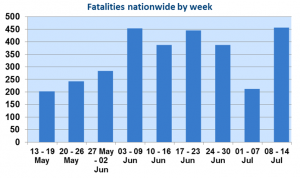 Bosley and Letayf
The 5 Challenges to Tech Entrepreneurship in Iraq