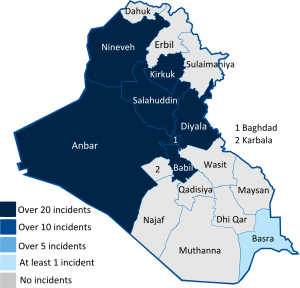 Violence across Iraq’s northern and central provinces remained at a similar intensity to the previous reporting period and only Kirkuk experienced a significant increase in the number of attacks. Fatalities fell, but 318 people were killed and over 500 injured as a result of the ongoing violence. According to UN figures released this week, 5,576 people have died in Iraq in the first 6 months of 2014 and 11,665 injured. By comparison 7,800 died in 2013. The success of ISF air operations dominate  government reporting but the heavy use of air power against ISIS fighters in Nineveh and western Anbar demonstrates the lack of real options for the ISF to take back these areas in the short to medium term. ISF operations continue in eastern Anbar and Salahuddin as well as areas to the east and south of Baghdad aimed at pushing back ISIS but these are unlikely to have any long-term success beyond Shia and ethnically mixed communities. While the momentum of ISIS’s June advance appears dissipated, regionally the group continues to consolidate its successes and Iraqi authorities and international observers are correct in no longer underestimating the group’s capabilities and strategic ambitions. The concentration of ISF forces and newly-raised Shia volunteers in areas of government control, particularly Baghdad, has disrupted ISIS cells leading to a fall in VBIED activity. It is assessed that increasing the intensity of attacks in the capital through VBIED and lone suicide bomber attacks against Shia civilian and religious targets is the short term goal of ISIS while consolidating areas already under its control. Drawing ISF away from Baghdad Governorate towards Babil, Diyala, Salahuddin and Anbar will be key to achieving this goal. Politically, limited progress towards the election of a new President this week continues to confirm that government formation remains distant; more than 100 candidates reportedly registered, raising the possibility that the vetting process would delay any vote to August.

In Mosul, where ISIS this week issued an ultimatum to the city’s Christian communities which forced them to leave the city overnight, ISF continue to target militants from the air with reported successes but only Peshmerga maintain control of any territory in the governorate: four Kurdish troops were injured in a skirmish north of Mosul. ISF airstrikes continue to cause civilian casualties, most notably in Kirkuk this week where 10 civilians were killed and 20 more injured by attack helicopter strikes on Hawija, the contested town west of Kirkuk. Peshmerga units continue to hold the extended Kurdistani borders although the security of Kirkuk city deteriorated this week exposing the fact that Kurdish control of Kirkuk is contested by militant cells within the city. The number of IED and direct fire attacks rose in the city as well as in the small town of Taza, to its south. This week’s deployment of Shia volunteers to Kirkuk Governorate will raise tensions and likely fuel attacks rather than aid security. Samarra in Salahuddin continues to experience violence although the focus of clashes remains north of the mixed city. ISF reportedly asserted control of Baiji refinery although the cities of Tikrit and Baiji both remain contested. Some of the heaviest fighting between Peshmerga and ISIS continues to occur on the new boundaries of Diyala; Muqdadiyah, Khanaqin and Jalawla continue to experience daily violence. 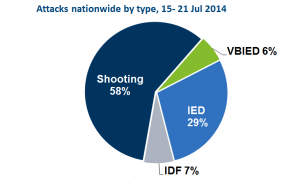 Territorial boundaries in Anbar remain largely unchanged and airstrikes continue to cause both insurgent and civilian casualties without preceding any real success on the ground. Both the routes and cities of western Anbar remain under ISIS control with ISF ground operations in Anbar focussing on Qarma, east of Fallujah, and in rural districts to the city’s north. ISF announced that the routes from Haditha to Hit and from Haditha north to Baiji are now secure but all three cities remain contested. In Baghdad a series of VBIEDs on 19th July caused dozens of casualties but the impact of such operations remains reduced as the increased ISF presence in the city continues to disrupt Sunni militants. A heightened threat of mass-casualty attacks will remain against Shia targets throughout Ramadam and Eid al-Fitr. The detonation of an Australian suicide-bomber in Baghdad and reports of German, Tunisian, Afghan and Chechen fighters killed or captured this week demonstrate both the continued international draw of ISIS as well as the resilience of its supply chains and facilitation networks within the centre of ISF control. The group’s consolidation regionally will increase the flow of suicide attackers to the Iraqi capital in the coming months.

Violence in Babil Governorate’s northern districts continued to increase this week. The steady escalation in violence is partly due to an increase in Shia volunteers raising tensions in mixed districts as well as a concerted strategy by ISIS and other Sunni militants to target ISF and Shia targets south of the capital in order to draw ISF units away from the city. Clashes on 18 July alone resulted in the killing and injuring of over 50 ISF and Shia volunteers in the districts of Jurf al Sakhar and Mussayib. Against a backdrop of Shia festivities as well as an increased number of funerals of volunteers killed in the northern and central provinces, southern provinces remained calm with only one incident of tribal violence and a low-level political assassination reported in Basra.