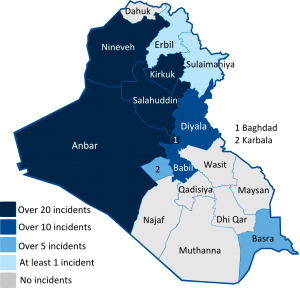 Amidst continuing violence across northern and central Iraq, particularly where Peshmerga, ISF or Shia volunteers defend new borders with IS militants, the shooting of over 60 Sunni worshippers by suspected Shia militiamen in Diyala is a reminder of the extreme sectarian tensions which provide the backdrop to the current headlines dominated by the Islamic State. US airstrikes continued throughout the reporting period, largely targeting IS mobile artillery pieces and other military hardware. In the wake of the killing of US journalist, James Foley, the US administration has refused to be drawn on its intentions beyond a broad intention to push IS militants from Iraq in order to contain them in Syria.

The presence of both US and UK Special Forces in northern Iraq is now an open secret and intelligence-led raids against IS leadership aimed at degrading the group’s decision-making structure and yielding intelligence about future IS intentions are likely to be conducted alongside the air support and humanitarian efforts. The targeting of IS military hardware helped repel an attack on the Baiji refinery whilst also ensuring that Peshmerga and ISF forces were able to hold their positions in the face of IS assaults.  The detonation of a vehicle close to Erbil this week, believed to be caused by an adhesive or magnetic IED raised concerns that the autonomous region will see an increase in attacks from territory controlled by IS. The three car bombs in Kirkuk, which killed over 30 people, indicate the extant strength of the Islamic State’s VBIED capability, a capability which will be increasingly relied on should US airstrikes continue to prevent them from challenging ISF and Peshmerga positions by more conventional means.

Despite US airstrikes, IS militants continue to challenge Peshmerga and ISF in the North, especially in contested towns and villages where militants can move amongst local Sunni populations and avoid Iraqi and US air power as a result. The town of Jalawla in Diyala Province remained the scene of heavy clashes while Miqdadiyah saw Shia volunteers targeted throughout the reporting period. In Kirkuk city there was a significant increase in IED attacks on top of the three VBIED attacks which struck the entrance to the Rahimawa market and a Peshmerga building under construction. The tackling of VBIED networks in Kirkuk and elsewhere is unlikely to be resourced to the extent necessary to defeat them while the ISF and Peshmerga remain fixed defending territory. Even US intelligence support is unlikely to stretch to VBIED networks at present while domestic US pressure to see IS pushed back and its leadership held accountable dominates strategy. The attack by suspected Shia militiamen on the Sunni Mosab Bin Umar mosque in Bani Weiss likely initiated the VBIED response the following day but its repercussions will certainly continue to be felt and further VBIED and SVEST attacks against Shia religious targets in northern cities and Baghdad should be expected. 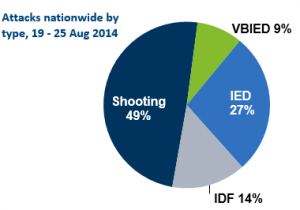 On 12 August, a suicide bomber attacked a checkpoint near Abadi’s home in Baghdad without causing casualties. On 13 August, a series of five VBIEDs hit the Jadeidah, Sharqi, Bayaa, Aamel and New Baghdad neighbourhoods, killing at least 16 civilians and injuring hundreds. On 17 August, a bridge connecting the Fallujah corridor with the south-west of Baghdad, and used by the ISF to transport supplies, was blown up by IS insurgents. An early effect of Maliki’s resignation was felt just one day after the controversial Shia leader stepped aside. On 15 August, members of several Sunni tribes reportedly agreed to ramp up their joint effort with the ISF to fight insurgents in the north-eastern part of Anbar. This tribal surge also followed Anbar governor Ahmed al-Dulaimi’s statement that he had secured US support. Unconfirmed reports stated that US fighter jets conducted flights over the Haditha Dam to prevent IS from capturing the dam. US involvement in Anbar is a sensitive matter as the region has historically been anti-American. Tribal clashes and ISF airstrikes reported in Anbar remained predominantly concentrated in the corridor stretching from Haditha to Fallujah, with accounts of IS attacks in Hit.

Two car bombs struck Karbala on 25 August killing four people and injuring 17 more, just hours before two car bombs struck Hilla in Babil Governorate. The targeting of southern Shia populations will increase despite the greater difficulties of conducting VBIED attacks in the Shia South. Karbala represents a particularly sensitive target and Sunni extremists understand the enhanced impacts of killing civilians there. Jarf al-Sakhar in Babil’s Musayib District continues to see the majority of violence south of the capital as existing insurgent cells benefit from increased IS support. Basra must continue to expect VBIED or suicide attacks although these are unlikely to affect international operations and will instead seek to inflict civilian casualties. The few violent incidents in the city this week were largely criminal. 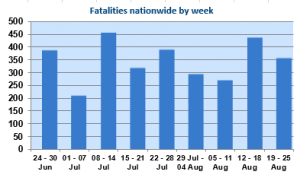