During the meeting, the two ministers discussed the Iraqi political and security developments and the importance of supporting Iraq in eliminating the terrorist Islamic State (IS).

Minister Jaafari and Minister Hammond held a joint press conference on the recent developments in Iraq and the region, the international and British role in the fight against terror.

Also on Monday, the Kurdistan Region President Masoud Barzani welcomed Minister Hammond at his office in Salahaddin. The President and the UK Foreign Secretary discussed the fight against ISIS terrorists, recent advances by the Peshmerga forces, and the political process in Baghdad.

Foreign Secretary Hammond commended the role of Kurdistan and the Peshmerga forces in the fight against the ISIS terrorists and recognized that the Kurdistan Region bears the lion’s share of this fight.

Both agreed that to defeat ISIS terrorists, in addition to joint military, political, and economic effort, there is also a need to confront their twisted ideology.

On the political process in Iraq, President Barzani stated that the Kurds have decided to support the new Iraqi prime minister. 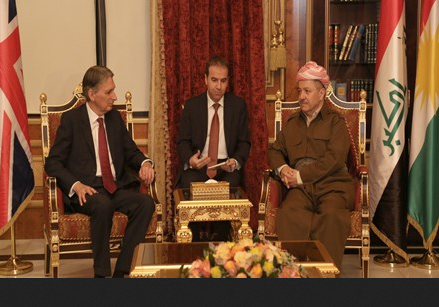 Electricity Minister Meets with US Ambassador
Demining Continues at Block 9