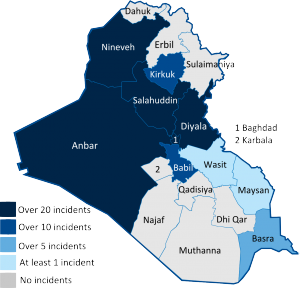 Elevated levels of violence continued to be reflected in a high number of casualties, with at least 408 recorded deaths over the reporting period. While reporting remains interrupted in large swathes of the North, evidence of war crimes committed by Shia fighters against Sunni populations was described in a briefing released by Amnesty International on 14 October. Citing abductions and execution-style killings, the report reignites fears that Iraq’s cycle of violence may lead to a full remobilisation of extremist Shia militias and precipitate an all-out sectarian conflict comparable to the 2006-2007 civil war. Meanwhile, Turkey has agreed to provide military bases to the US and their allies. This decision follows international criticism with regards to Turkey’s reluctance to join the airstrike campaign initiated by the US and supported by a number of NATO and Arab countries. Despite the progressive organisation of the various forces joining the fight against ISIS in Syria and Iraq, ISF ground operations remained largely ineffective in attempting to reverse ISIS’s territorial gains. On the contrary, insurgents managed to consolidate their positions in Anbar, securing one of their main supply routes from Syria and increasing their areas of operations west of Baghdad. ISF’s lack of efficiency was coincident with a stagnant and divided political landscape, with opaque discussions towards filling the government’s key security positions failing to yield any result.

While the northern frontline remained largely stable, ISF counter-offensives conducted over the past weeks failed to deter ISIS from launching large-scale assaults against pro-government forces. The most deadly incidents occurred in Diyala, where a joint force of ISF and Kurdish soldiers attempt to contain and repel ISIS. On 12 October, a triple suicide bombing killed at least 26 Kurdish security forces in Qara Tappa, in the north-east of Baquba. The first bomber reportedly detonated an explosives vest at the gateway to a security compound, quickly followed by two suicide bombers who drove VBIEDs into the compound. At least 60 people were wounded in the attack, including a large number of civilians. Heavy clashes were also reported in the Sadia area, with a series of ISIS-led assaults and pro-government counter-attacks maintaining the territorial status quo. Intelligence sources reported that insurgents moved a large number of fighters to southern areas of Kirkuk, in preparation for an attack in the province. Militant activity was also recorded in districts north of Samarra, where most of the Shia volunteer units are stationed. Current dynamics indicate that important clashes should be confined to north-eastern districts over the next days, with the fronts in Nineveh and Salahuddin expected to remain stable.

ISIS militants consolidated their positions in and around Hit, forcing Iraqi troops to retreat from their nearby training base on 13 October. The capture of this military camp is the latest blow to the ISF, which has abandoned several positions to ISIS in Anbar over the past weeks. ISIS is now in control of most of the territories between the Syrian border and Fallujah, confirming their grip on the western province and reinforcing their supply route from Syria. In this context, reversing territorial gains made by insurgents will be much more challenging. While the ISF remain in control of the strategic Ain al Assad base which protects the Haditha Dam, government forces reportedly evacuated several positions in Ramadi, where a roadside bomb killed Anbar’s police chief on 13 October. Prisoners were reportedly moved from Ramadi’s central prison to other facilities in Baghdad, in a bid to prevent a large-scale militant operation aimed at freeing inmates. Levels of violence in Baghdad remained aligned with previous averages despite an increase in VBIED assaults, with six car bombs recorded. These attacks killed at least 59 people and injured over 100. Levels of militant activity are expected to remain elevated over the next reporting period, with possible operations in Baghdad’s southern belt.

As previously assessed, the South-East avoided the series of low-impact VBIED attacks witnessed in the previous reporting period. Levels of violence continued to follow established patterns, with Babil’s northern districts concentrating the majority of militant incidents, and greater operational freedom translating in increased levels of criminality in the South-East. Recent weeks have seen displays of greater confidence from criminal gangs, resulting in an increase of kidnap-for-ransom incidents, particularly in Basra.  At least four kidnapping incidents were reported in Basra alone over the past week. As ISIS establish their presence in Anbar, neighbouring southern governorates could be exposed to increased levels of militant activity over the next weeks. 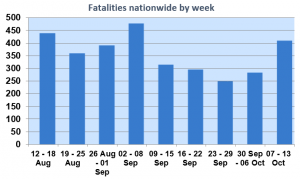