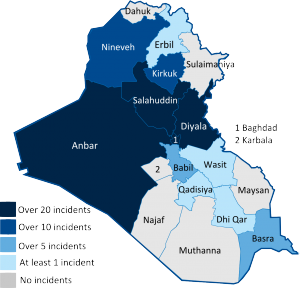 International support for Iraq’s counter-ISIS offensive saw a further rally in the wake of last week’s terrorist attacks in Paris, with EU nations Sweden and Finland joining regional allies in preparing to send direct military training and assistance to Iraq’s fragile national armed forces. Coming shortly after PM Abadi announced that it could take the country more than three years to restructure and retrain the Iraqi army, the deployments will nonetheless add to the growing credibility of the 60-nation coalition effort, needed now more than ever given intense pressure posed by militants in northern and western frontiers this week. In one particularly significant encounter on 11 January, some 24 Kurdish soldiers were killed when ISIS fighters mounted a surprise attack on the frontier town of Gwer, bringing the conflict to within 40 kilometres of the KRG capital Erbil amid reports of heavy casualties sustained by the militant group. While such raids have so far proven insufficient to reverse the Kurdish gains of recent weeks, the incident, believed to have been one of the deadliest single battles since the summer has once again illustrated the resilience of the militant opposition, despite over five months of aerial bombardment and battlefield attrition.

Heavy fighting continues to be reported at Samarra and the outskirts of Baiji and Tikrit, following the deployment of militant and repeated use of high impact VBIED and SVEST tactics. The principal targets of these raids remain Iraq’s loosely termed “popular mobilisation units” (PMUs) which include both historic Shia militias and volunteer fighters, as well as Sunni tribesmen, and have typically proven the more vulnerable of coalition fighters due to their relative combat inexperience. Between 08 and 12 January, 20 such PMUs were killed in car bombings in Samarra and Tikrit, most likely in a bid to deplete allied reserves prior to upcoming ISIS offensives. While ISIS fighters succeeded in capturing the Kurdish-held villages of Qayarrah south-east of Mosul on 10 January, Peshmerga units are reported to have returned to the territory a day later, with sporadic clashes ongoing at the time of writing. As before, the risk of direct assault on Kurdish towns surrounding Erbil remains low, given the resilience of Peshmerga divisions close to the KRG capital, despite a low-level risk of VBIED and IED strikes in allied-held areas.

Levels of violence more than double across Anbar governorate as ISIS inflict further gains against ISF-tribal units in Hit district and central Ramadi. In both cases, ISF were forced to respond to major assaults by militant forces on 06 January, which saw militants seize control of northernmost areas of the Baghdadi sub district amid multi-pronged raids into the heart of the provincial capital. At least 10 ISF members are believed to have been killed on 06 January alone, with heavy street-fighting continuing In Ramadi up to the 11 January. While Iraqi army units were subsequently able to regain their foothold in the Juba area of Baghdadi a day later, extending the frontline up to Al-Tilul area by 12 January, overall, militants retain the initiative across the western front, with limited prospects for a relief of either Ramadi or Haditha towns in the immediate future. Baghdad by contrast saw stabilisation over the reporting period, as insurgent-friendly Sunni areas (namely Abu Ghraib, New Baghdad, and Istiqal saw levels of violence drop to monthly lows, most likely as a consequence of a diversion of resources to the Anbar campaign.

Basra security agencies intercept explosives in a suspected plot against Um Qasr port, tribal violence continues to raise the threat of armed criminality in Basra city, Zubayr and Abu Al Khaseeb. While stated as an attempted terrorist attack by the city’s Joint Operations Command, there remains doubt over whether the four rockets and IEDs seized by ISF units in close vicinity to the port on 12 January were intended for a strike against commercial infrastructure. Among those dissenting with the police’s verdict were members of the Basra city council this week, who asserted instead that the weapons found by security forces were in fact relics of previous conflicts, a charge which remains plausible, given the large number of UXO and historic armed caches which continue to be reported in the course of recent ISF operations. In Wasit alone, four separate UXO depositories and some 14 rockets were found in the course of security sweeps over the reporting period. Demonstrations in the cities of Nasiriyah, Basra and Diwaniya are also expected to continue for the coming week, though for the most part confined to small protests surrounding pay and labour disputes among local state employees. 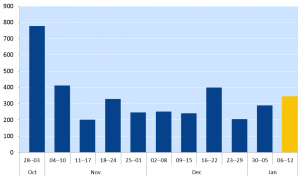