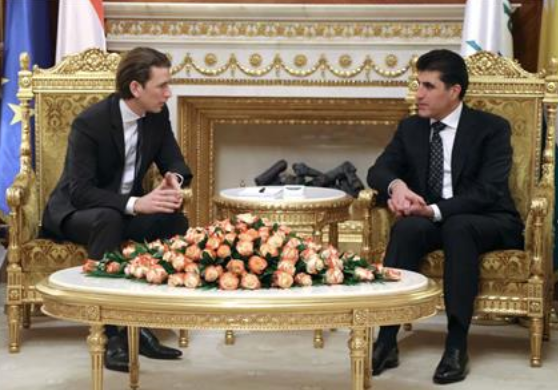 The Austrian Foreign Minister said that the purpose of his delegation’s visit to the Kurdistan Region is to closely observe the developments in the war against the Islamic State terrorist organization, ISIS and discuss the latest political and security developments in Iraq and the wider region.

He congratulated the people and government of Kurdistan Region on the latest victories achieved by the Peshmerga forces and stressed Austria’s determination to continue to provide humanitarian assistance to refugees and displaced persons.

Prime Minister Barzani highlighted the desire of the Kurdistan Regional Government to build stronger relations with Austria and expressed his gratitude for the humanitarian assistance that Austria has provided to the Kurdistan Region. He also briefed the Austrian delegation on the latest developments in the war against terrorism as well as an overview of the political situation in general.

They two sides also discussed the relations between the Kurdistan Regional Government and the Federal Government of Iraq and the recent agreement signed between Erbil and Baghdad on oil export and budgetary issues.