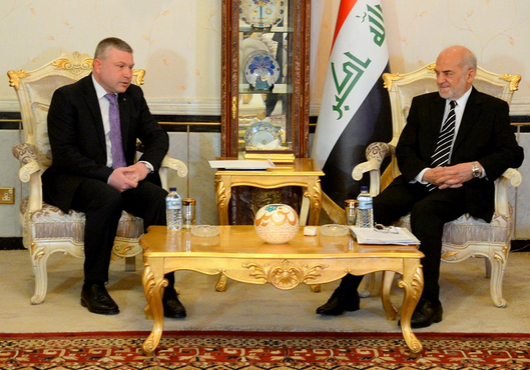 Iraqi Foreign Minister, Dr. Ibrahim Al Jaafari, received the Armenian Ambassador to Iraq, Karen Grigoryan, at his office on Sunday, and discussed with him bilateral relations, opening joint cooperation horizons through accelerating the preparation for holding the first meeting of the Iraqi-Armenian Committee, excluding the diplomats from visas, facilitating the procedures for granting visas, and opening a consulate in Erbil.

Jaafari received an invitation from his Armenian counterpart to visit Armenia. He asserted that Iraq seeks to open to the world countries on the basis of mutual interests and facing common threats, adding that he would visit Armenia to boost relations.

For his part, the Armenian Ambassador stressed his country's keenness on enhancing bilateral relations, noting that Armenia is providing lots of aids to the displaced Iraqi families, thanking the Iraqi government for exerting efforts to preserve the security and safety of the minorities in Iraq.