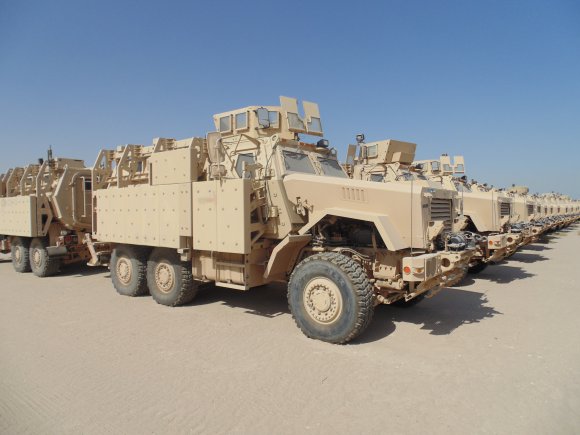 The Defense Department has expedited $17.9 million in equipment and supplies –- some which have already been delivered –- to the Iraqi government, Pentagon spokesman Army Col. Steve Warren told reporters on Tuesday.

Warren provided a general update on equipment and supplies authorized for delivery to the Iraqis.

“This was a $17.9 million [Foreign Military Sales Program] case,” he said. “It was an expedited delivery, which took 22 days from the time of signature -- a letter of authorization -- until delivery. This is less than a quarter of the time it normally takes to execute these types of deliveries.”

Warren provided dates and quantities of supplies and equipment authorized, noting some have been delivered while the rest is slated for delivery.

Along with that, Warren said, thousands of Kevlar helmets and body armor were delivered Jan. 22.

In addition, he said, 200 Harris vehicle-mounted radios will be shipped next month to equip those 250 MRAPs (pictured), noting the MRAPs were excess U.S. vehicles.