ShaMaran Petroleum reports updates to estimated reserves and contingent resources for the Atrush block as of December 31, 2014.

The reserves and contingent resources estimates were provided by McDaniel & Associates Consultants Ltd. ("McDaniel"), the Company's independent qualified resources evaluator, and were prepared in accordance with standards set out in the Canadian National Instrument NI 51-101 and Canadian Oil and Gas Evaluation Handbook (COGEH).

McDaniel estimates for reserves and contingent resources have taken into account the results of all available drilling, well testing results and other information acquired since December 31, 2013, i.e. Atrush-4, Chiya Khere-5 ("CK-5"), CK-8 and CK-6, the latest remapping based on the final 3D seismic processing and the ongoing commitment to and work program in support of the first phase of Atrush development as defined by the KRG approved Field Development Plan. 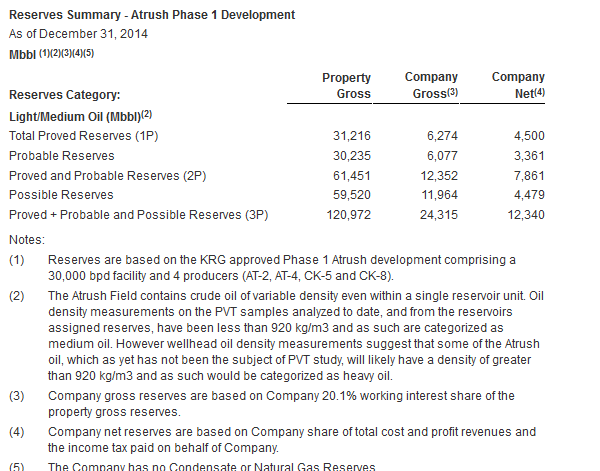 Possible reserves are those additional reserves that are less certain to be recovered than probable reserves. There is a 10% probability that the quantities actually recovered will equal or exceed the sum of proved plus probable plus possible reserves. The reserves were estimated using forecast prices and costs. The sales oil price was based on the McDaniel January 1, 2015 price forecast.

The estimated discount to Brent is made up of a unit cost element and a percentage element and accounts for the quality differential, transportation tariffs and marketing fees. All of the Atrush oil production is to be exported via the Khurmala-Fishkabur pipeline to Turkey. A 37 kilometre pipeline is being built from the Atrush Field to a tie-in point on this export line and will be operated by KRG.

At this stage the oil price differential is uncertain and any additional announcements of sales and pricing of exported Kurdish crude during 2015 may impact on future price scenarios.

The updated estimates of contingent resources for the Atrush block are as follows: 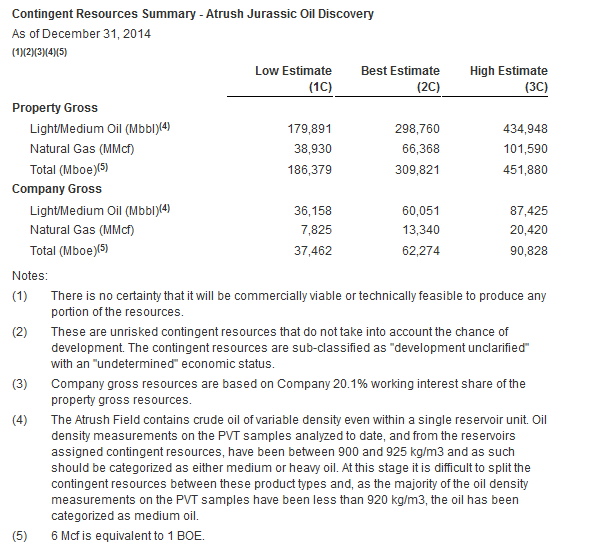 The resources included in the table above are classified as contingent as the associated project(s) are dependent upon the results of the Atrush Phase 1 development and ongoing appraisal work; this first phase of development should, together with further appraisal drilling, narrow the uncertainty in the contingent resources estimates and help determine if their development is economic.

There were no material changes to the range of reserves reported at December 31, 2013, and it therefore remains the view of the Company that the reserve base continues to support the 30,000 bpd Atrush Phase 1 development program scheduled for startup in the fourth quarter of 2015.

A reduction in contingent resources from the quantities reported as of December 31, 2013 reflects a more complex geological structure (interpreted from the 3D seismic data processed in 2014 and year to date well results) and a reduced estimate of recovery factor from the rock matrix. The recoverable estimates are related to a water drive mechanism as per the current field development plan and therefore exclude any upside associated with any future improved oil recovery efforts

9 Responses to ShaMaran Updates on Reserves