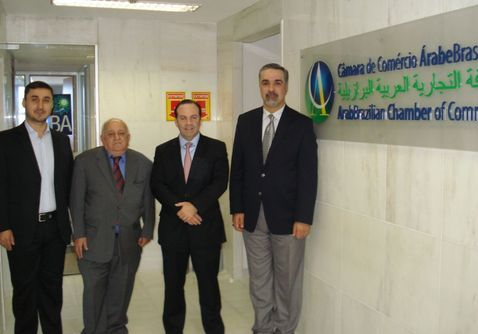 Iraq wants to expand the presence of Brazilian companies in its market. That was the theme of the visit made by Adel Alkurdi, ambassador of the Arab country in Brasilia, to the Arab Brazilian Chamber of Commerce in São Paulo this Thursday (19th).

The diplomat was welcomed by the president of the Arab Chamber, Marcelo Sallum, and the CEO, Michel Alaby. He was followed by Fareed Sabak, an Iraqi businessman living in Brazil.

“The Arab Chamber often promotes activities in Iraq, especially in the region of Kurdistan, such as the promotion of the fair [Erbil International Fair] with Brazilian companies. We would like these relations to expand to other regions of Iraq, especially Baghdad”, said Alkurdi.

According to him, the Iraqi capital is a safe place to do business and attend events. To the diplomat, it’s important that companies from Brazil attend exhibitions such as the Baghdad International Fair, an annual multisectoral event.

“Many European and Arab companies attend this fair and operate in Baghdad in several sectors. It’s a safe city”, he emphasized.

According to the diplomat, Iraqi companies have interest in establishing joint ventures with Brazilian companies, which he believes is a good way for Brazilian to enter the market of the Arab country.

According to the ambassador, the main sectors in which Iraq wishes to open for partnerships with Brazilian companies are energy, oil, dairy, hides, medical equipment and products, cement and sugar.

Brazil exports to Iraq grossed US$ 25.2 million in the first two months of 2015, an increase of 29.5% over the same period of last year. The main items shipped were iron or steel pipes, poultry, sugar, tractors for construction and packaging, according to data from the Ministry of Development, Industry and Foreign Trade (MDIC).