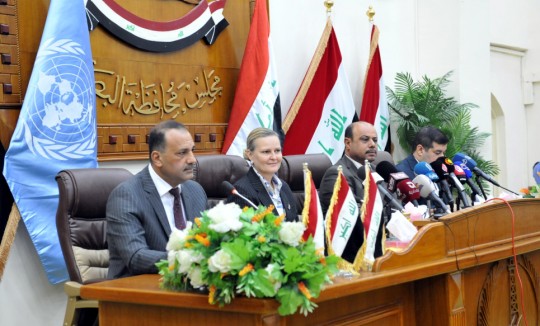 The Basra Compact, a flagship partnership to revive the economy in southern Iraq

The authorities of Basra and the UN Development Programme (UNDP) have signed a flagship agreement, the Basra Compact, aiming at strengthening participatory and accountable governance and reviving the economic activity in the southern governorate, which is not just oil-rich but needs to invest in its human capacity and private sector development. Protecting the cultural and ecological heritage of the Mesopotamian Marshlands is also a priority.

Despite being the richest governorate and hosting the main port in Iraq, Umm Qasr—the only shipping hub in the country—Basra is one of the most affected by poverty and chronic unemployment with 16.1% of the population living below the poverty line of US$ 2.5 per day and facing staggering challenges in terms of access to services.

“Basra’s cultural heritage and natural resources represent an unmatched wealth of opportunities that can actively contribute to the recovery of Iraq’s economy and national stabilization strategy,” noted Sabah Al-Bazouni, who leads this initiative as Head of the Provincial Council.

“This agreement is enhanced by a series of consultations and mutual exchange of information to capitalize on natural resources being progressively reinvested towards the advancement of human development,” he said.