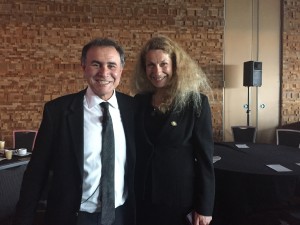 Vancouver, May 7th, The Next Billion Conference.

A unique opportunity, a global dialogue – with the aim of moving gender inclusion  beyond the 'nice to have', to the 'must have', driven by a hard financial evidence. The conference aligned global thought leaders, policy makers and economists with key data. With women cited by experts as the largest emerging economy in the world, the question of the power of long term strategic investment in inclusion and diversity is beyond doubt. What is less clear though, is how to realise this potential for growth in terms of national and economic advantage –  the Next Billion Conference was all about taking steps to make it happen…

To contexualise this in terms of Iraq. In March’s Middle East Congress, the region’s richest oil resources were cited as belonging to Iraq. At the moment 50% of its other richest natural resource - its people, are not engaging within the country’s economic activity. Less than 1% of managers in Iraq are women, just 17% of women are engaged as entrepreneurs or employees.

Alexander Meira da Rosa , VP for countries of the Inter-American Development Bank, was able to explain that the significant economic growth enjoyed by countries such as Brazil, which at one point had battled with a similarly challenging gender gap, was driven in part by the burgeoning economic participation of its women. By understanding that gender is an economic development issue and instituting a pro-women policy in dealings in partnership with government and private sector investors, he shared that regionally this gender gap had closed by  70%.

Indeed, the importance of partnerships was at the heart of most discussions. The idea of a collaborative national and international approach in terms of closing the gender gap - with policy advocacy, business profits and social impact forming a triangle of success, was championed by many speakers, including former US Ambassador for Global women’s issues, Melanne Verveer, and Accenture’s Marianne Schoenig. Other key points of peer-to-peer guidance, within this strongly evidenced-based dialogue, included: