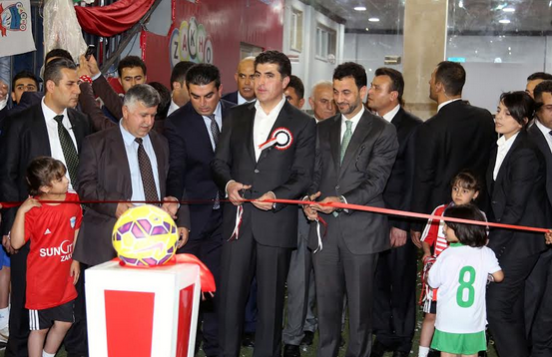 Kurdistan Region Prime Minister Nechirvan Barzani hailed the private sector for its effective contributions to the Kurdistan Region economy since approval of the Investment Law in 2004.

Prime Minister Barzani expressed satisfaction with the expansion of investment in the sectors of agriculture and industry. His statements were made during last week’s visit to Dohuk Governorate, where he opened the Zakho International Football Stadium and the Rixos Hotel in the city of Dohuk.

During the opening ceremony of Zakho International Stadium, Prime Minister Barzani affirmed it as another indication of Kurdistan people’s quest for life, progress, and prosperity in the midst of adversity caused by war, terrorist threats, and oppression.

“No obstacle, embargo, or budget cutting can weaken Kurdistan people’s will for progress, reconstruction, and success,” he said.

He praised the role of Kurdish entrepreneurs for the support and assistance they have been offering voluntarily to the Peshmerga forces in their fight against the Islamic State terrorist organisation, also known as ISIS.