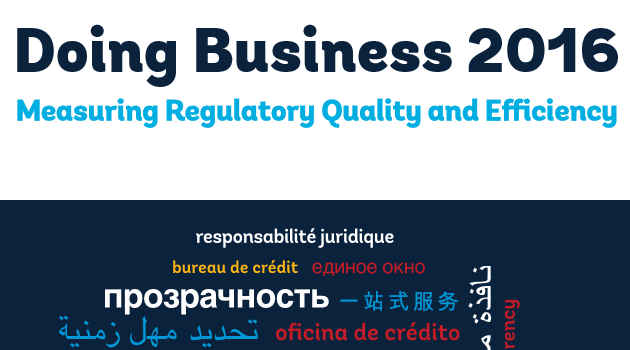 Iraq has been ranked 161th out of 189 countries in the World Bank‘s recent Doing Business 2016 report, down from 156th place the previous year.

Top of the list were Singapore, New Zealand and Denmark, with last place going to Eritrea, just behind Libya and South Sudan.

The pace of business regulatory reforms picked up during the past year in the Middle East and North Africa, despite conflict and turmoil in the region, says the World Bank Group’s report.

It finds that 11 of the region’s 20 economies implemented a total of 21 reforms facilitating the ease of doing business. This is a significant increase compared to the annual average of 16 reforms during the past five years.

The United Arab Emirates (UAE) is the region’s top ranked economy, with a global ranking of 31, while countries experiencing conflict and violence are amongst the world’s lowest ranked, including Libya (188), Syria (175) and Yemen (170).

Doing Business measures regulations affecting 11 areas of the life of a business. Ten of these areas are included in this year’s ranking on the ease of doing business: starting a business, dealing with construction permits, getting electricity, registering property, getting credit, protecting minority investors, paying taxes, trading across borders, enforcing contracts and resolving insolvency. Doing Business also measures labor market regulation, which is not included in this year’s ranking.

3 Responses to Iraq Falls in Ease of Doing Business index