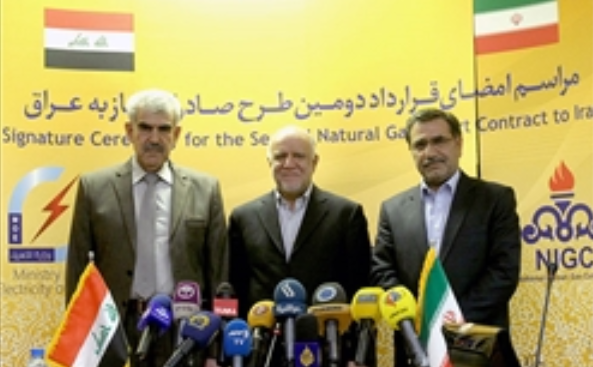 Iran has agreed to send 35 mcm/d of its gas to the Iraqi city of Basra for a period of 6-years.

Based on the deal, signed by Head of National Iranian Gas Company (NIGC) Reza Araqi and Iraqi Deputy Minister of Electricity Khalid Hassan Saleh, Iran will supply 20mcm/d of natural gas to Basra in cold seasons and 35mcm/d in hot seasons of the year.

Gas exports to Basra will start with a daily volume of 7 mcm which could increase to 20 mcm/d in three phases.

Iran has prepared the required infrastructures to send gas to neighboring Iraq.

The deal makes Iraq Iran's biggest gas customer as it allows the selling of 40 mcm/d to 65 mcm/d of its gas to Iraqi cities.

Iran will start constructing the required pipelines and pressure boosting facilities within the next 1.5 years to supply the amount to Iraq, Araqi told Shana following the deal's signature.

The gas will be fed to Iraq's gas network from Iran's 6th gas trunkline (IGAT 6), he added. An offshoot of IGAT will cross Iranian city of Khorramshahr to reach Basra. IGAT 6 transfers gas from the giant offshore South Pars gas field in southern Iran to the border province of Khuzestan.

The price of the gas is confidential, but it has been set in accordance with regional market's norms, said the official.

"Exporting gas to Iraq will boost trade between the two countries," Araqi said.

During the deal's 6 year, 40 billion cubic meters of gas will be supplied to Iraq, also said director of international affairs of NIGC.

Iraq has initiated a number of development projects in its energy sector and that is why the deal's duration is only 6 years, Azizollah Ramezani said.

"If Iraq's development projects fail to boost its gas output, the deal may be extended and there is room for more cooperation in this regard," he added.

Iran has several gas deals with neighboring states like gas exports to Turkey, gas swap with Azerbaijan, gas-for-power barter with Armenia, and gas exports to Pakistan, which are yet to become finalized.

Part of the gas to Iraq will be used for generation of gas to address some of Iraq's electricity troubles.

The country, also an OPEC member, is facing serious load-shedding and Iranian companies are operating 33 megaprojects, worth $1.5 billion, in Iraq for the time being.