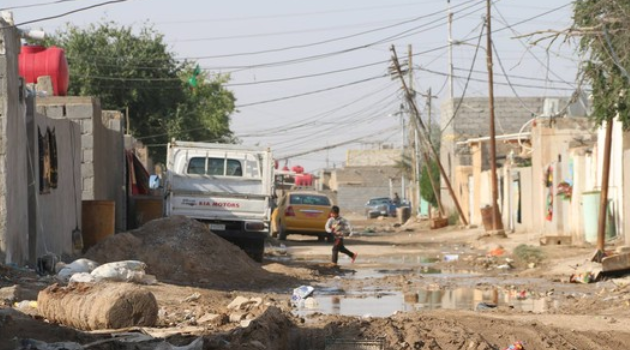 NIQASH visits Wasit's Oil Town. But this is no wealthy area for oil billionaires. This shanty town between two oil fields is full of displaced people in shacks, with no sanitation or easily accessible drinking water.

It's a random neighbourhood, with barely any of the necessities one would normally find in a housing district. But somehow the Hay al-Naft neighbourhood, also known as “Oil Town”, located between the Ahdab oil field, run by the China National Petroleum Corporation (CNPC), and Russia's Gazprom-run field at Badra, has become a gathering place for those with nowhere else to go.

More than 50,000 residents live here and most of them were displaced by the previous or present sectarian conflict. Locals say the shanty town was named Oil Town either because of its proximity to oil fields or, some suggest, because it is thought there may be oil underneath the town.

A woman living there who wished to be known only as Um Ali, said she had come here in 2006 after she was forced out of her own neighbourhood by sectarian conflicts.

“We see oil around us in all directions,” the woman in her 60s, her face dark and creased, told NIQASH. “But we don't benefit from any of the oil. We only inhale the smoke and fumes and fear the diseases they bring. I am really afraid for the future of my four sons here. I wish we could go elsewhere where we could live in dignity.”

The houses here, roofed with wooden panels that don't hold out the rain or wind, are separated by streets full of sewage, dirty water and rubbish. It's a kind of a shanty town where every dwelling was built randomly and without any planning, another resident who wished to remain anonymous, told NIQASH.