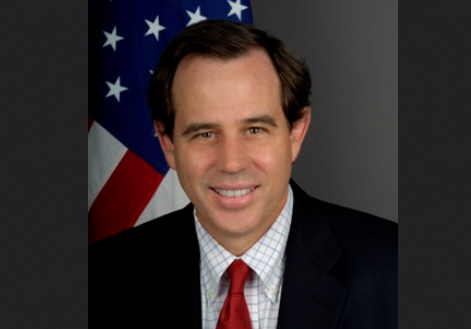 On Thursday, June 2, U.S. Ambassador Stuart Jones (pictured), together with the Minister of Planning Salman al-Jumayli, and Chief of Staff for the Prime Minister’s Office Dr. Mahdi al-Allaq, participated in the Ministry of Planning (MOP) conference entitled “Reforming Development in Iraq” at the Al-Rasheed Hotel in Baghdad.

Members of the Council of Representatives attended, along with officials from the Council of Ministers Secretariat, various government ministries, provincial governments, and the private sector.

The conference celebrated the Government of Iraq’s decision to require the use of Standard Bidding Documents for all government projects. It also marked the launch of the Iraq Development Management System (IDMS) for more effective management of government and donor-funded development projects in Iraq.

These key reforms will play a critical role in ensuring the fair and transparent management of public funds.  Improving the administration of the country’s economic assets is vital for enhancing infrastructure and quality of services provided to Iraqi citizens.

In his remarks, U.S. Ambassador Stuart Jones congratulated the Government of Iraq on these new reforms, emphasizing their implementation at the provincial and national levels. He underscored that these new reforms will help with oversight of the government’s $400 billion capital investment budget.

They are critical to resolve delays that have stalled nearly 4,000 projects and will ensure better prospects for the government to sign sound contracts with reputable companies, thereby significantly reducing disputes, corruption and waste.

The U.S. Embassy in Iraq, through the U.S. Agency for International Development (USAID)’s Administrative Reform Project (also known as Tarabot), supports the Government of Iraq’s efforts to build its capacity to deliver better services to Iraqi citizens. http://tarabot-iraq.org/