It also attributed the increase in the company's international production to higher production at West Qurna-2.

Lukoil gave the following summary of the company's involvement in project:

On 12 December 2009, a consortium of a Group company and Statoil won the tender for development of the West Qurna-2 field in Iraq, one of the largest crude oil fields discovered in the world, with estimated recoverable oil reserves of 12.9 billion barrels (1.8 billion tonnes). The service agreement for West Qurna-2 field development and production was signed on 31 January 2010 and then ratified by the Ministry cabinet of the Iraq Republic. After Statoil withdrew from the West Qurna-2 project in May 2012, the parties of the project are Iraq's state-owned South Oil Company and a consortium of contractors, consisting of a Group company (75% interest) and Iraq's state-owned North Oil Company (25% interest).

The Group launched the "Mishrif Early Oil" stage on the West Qurna-2 field and reached the planned production of 120 thousand barrels per day in March 2014. According to the service agreement, costs are compensated after this level of production is achieved and maintained during any 90 days within a 120-day period. In June 2014, we met this term and from the second quarter of 2014 started to receive cost compensation. The project's target production level is 1.2 million barrels per day and the total term of the contract is 25 years.

Accounting for the cost compensation within the West Qurna-2 project in the Group consolidated statement of profit or loss and other comprehensive income is as follows. The crude oil sales revenue is recognized after the Iraqi party has approved the actual invoice for the spending quarter. The invoice total amount depends on crude oil production volumes and the market prices for crude oil during the period. It also includes our remuneration fee. Subsequently, crude oil purchases based on actual crude oil shipments by the Iraqi party against its debt for cost compensation are recognized in Cost of purchased crude oil, gas and products. This crude oil is either sold to third party customers or delivered to our refineries. After realization of these products, respective sales revenues are recognized.

The West Qurna-2 project's summary is presented below: 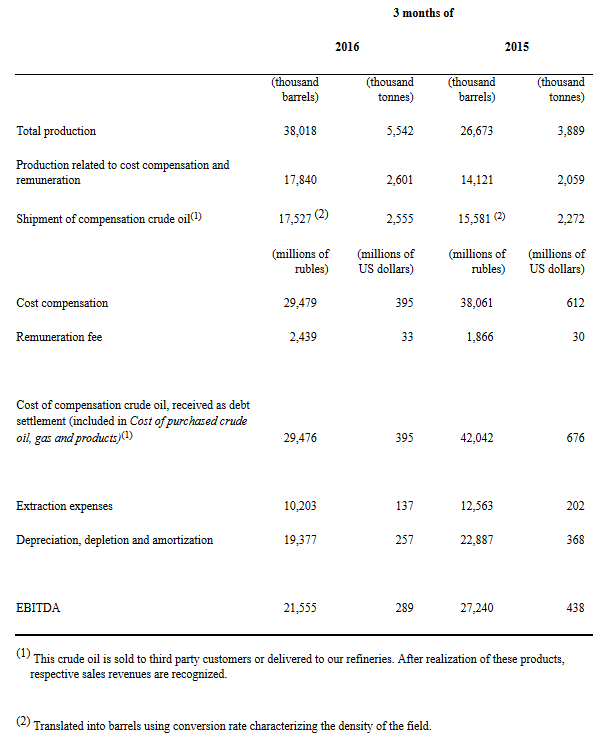 The Group is exposed to various risks due to its operations in Iraq. Management monitors the risks associated with the projects in Iraq and believes that there is no adverse effect on the Group's financial position that can be reasonably estimated at present.