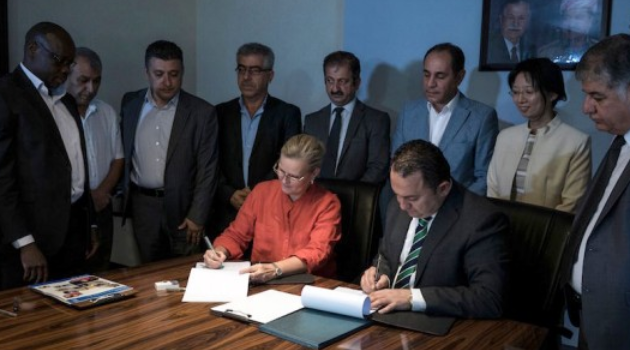 By Editor on 12th August 2016 in Iraq Public Works News

The United Nations Development Programme (UNDP) and the Governorate of Sulaimaniyah signed an agreement to rehabilitate the main water network for Sulaimaniyah City which provides safe drinking water for more than one million people.

“The Governorate and people of Sulaimaniyah have generously welcomed and supported displaced and refugee families,” said UNDP Resident Representative and UN Resident and Humanitarian Coordinator for Iraq, Ms. Lise Grande. “The city’s infrastructure is under enormous pressure because so many people need services. We’re very pleased that we can support the Governorate by helping to repair a key component of the water system.”

With generous funding from the Government of Japan, UNDP’s Iraq Crisis Response and Resilience Programme (ICRRP) and the Governorate of Sulaimaniyah will immediately begin to rehabilitate and restore the Dokan-Sulaimaniyah water network – the primary water pipeline for over 1.1 million residents, refugees and displaced people in Sulaimaniyah City.

“The strain of the humanitarian crisis upon the infrastructure and services of the Governorate renders our partnership with UNDP as vital,” said the Governor of Sulaimaniyah, Dr. Aso Faridoon Amin.

Following the ceremony, Governor Amin presented Ms. Grande with certificates of appreciation for the continuing support of both UNDP and the UN Country Team to the people of Sulaimaniyah.

Through the ICRRP, UNDP provides livelihood opportunities and promotes dialogue amongst displaced and host families as well as Syrian refugees in Iraq, in addition to offering legal support services to female refugees and IDPs, including victims of Sexual and Gender-Based Violence. ICRRP also focuses on improving the delivery of public services and providing direct support to Government coordination mechanisms and institutions.