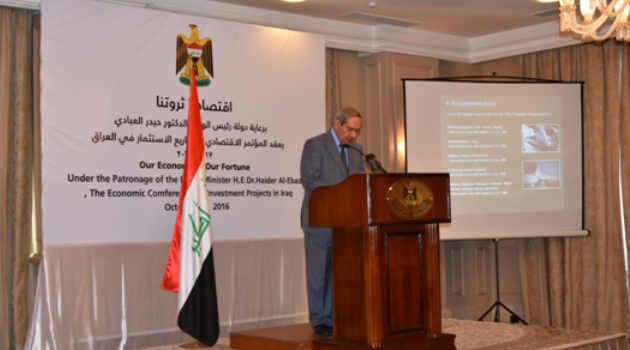 By Editor on 23rd October 2016 in Investment

The Elaborated Economic Conference for Investment Projects in Iraq was held in Baghdad on 17th October, organized by the Supreme Committee of Provincial Coordination and the National Investment Commission (NIC), with the attendance of a number of Parliament members, Ministers, Governors, Heads of Provincial Councils, Heads of Provincial Investment Commissions in addition to representatives of banks, foreign and Iraqi investors and businessmen, aiming at activating the suspended investment projects in all Iraqi provinces and announcing new investment opportunities.

The conference started with a welcoming speech by the head of the Supreme Committee of Provincial coordination, Dr. Torhan Al- Mufti who noted that the event would consist of four workshops; each one would be concerned with a number of provinces and the projects available there to be discussed with investors through an open dialogue.

Dr. Mahdi Al- Alaq, the General Secretary of the Ministers’ Council who represented H.E Prime Minister of Iraq by an opening speech through which he conveyed the Government’s interest and direction of activating and supporting private sector by holding several meetings that resulted in ratifying a package of recommendations in coordination with the concerned banks to ensure their leading role in the economic field.

Al-Alaq also referred to the Government’s decision to pay the contractors’ dues, though partially, and lay down mechanisms for postponed payment is a decision that confirmed its keenness to proceed with investment movement, showing his hope that this event can achieve positive results in the work of the concerned executive sides.

Dr. Sami Al- Araji, NIC Chairman reviewed the work of the National Investment Commission since the investment law approval in 2006, adding that the NIC has granted 1336 investment licences between 2009 and 2016, with a total value of $90.1 billion, distributed across various economic fields.

One Response to NIC grants $90bn in Investment Licences since 2009