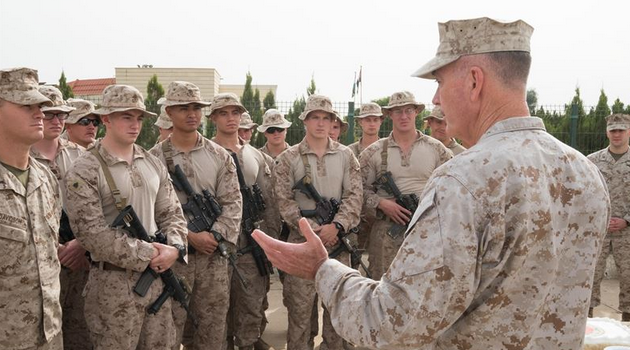 With the fall of Mosul within sight, the battle against the Islamic State of Iraq and the Levant terror group will shift to other domains and areas, the chairman of the Joint Chiefs of Staff said in a recent interview.

The offensive in Mosul is just one part of the total offensive against ISIL, Marine Corps Gen. Joe Dunford said. He spoke with media aboard his aircraft after a week spent traveling to Turkey, Saudi Arabia and Iraq to assess the situation and talk with leaders in the region and on the ground.

ISIL’s defeat in Iraq and Syria is underway. Iraqi forces have entered Mosul and Syrian forces have moved to isolate Raqqa. “From my perspective, the physical caliphate consists of Raqqa and Mosul,” Dunford said. “That’s the source of where they plan attacks for external operations and that’s the source for the credibility of their narrative.”

ISIL leaders declared a caliphate in June 2014, hoping to legitimize their claims. More than 45,000 foreign fighters drifted to Syria and Iraq to support the group, even though no Islamic leader supported the terror group’s claims.

Still, ISIL was holding ground, collecting taxes, exploiting the people of the area, and planning attacks on Islamic and Western countries. But now the territory is shrinking and they are under attack from Iraqi and Syrian forces supported by a global coalition.

“In my judgment, what Mosul does is reduce ISIL inside of Iraq back to an insurgency with terrorist actions and get them to a level where Iraqi security forces with a minimum level of outside support will be able to manage the violence inside Iraq,” the general said. “It denies ISIL freedom of movement and sanctuary inside Iraq.”

The simultaneous campaigns in Iraq and Syria have reduced the ground ISIL can hold. This has a further benefit in eliminating their revenue streams from taxes, shakedowns and oil production, he said.