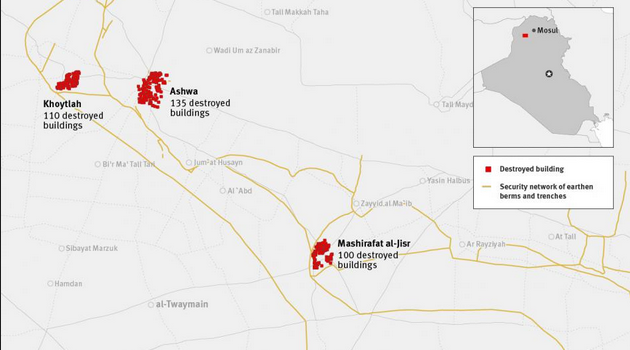 Armed forces fighting Islamic State (also known as ISIS) to retake a town and four villages near Mosul looted, damaged, and destroyed homes, Human Rights Watch (HRW) said today. There was no apparent military necessity for the demolitions, which may amount to war crimes and which took place between November 2016 and February 2017.

The Iraqi authorities should investigate allegations of war crimes and hold those responsible to account, Human Rights Watch said. The United States and other countries providing military assistance to the Iraqi Security Forces should press the government to carry out these investigations.

The United Nations Human Rights Council should expand the investigation it established in 2014 on ISIS abuses to include serious violations by all parties, including the Popular Mobilization Forces (known as the PMF or Hashd al-Sha'abi), units that were formed largely to combat ISIS, and are under the direct command of Prime Minister al-Abadi.

“Absent a legitimate military objective, there is no excuse for destroying civilian homes,” said Lama Fakih, deputy Middle East director at Human Rights Watch. “All the destruction does is to keep civilians from going home.”

One Response to HRW: Looting, Destruction by Forces Fighting ISIS