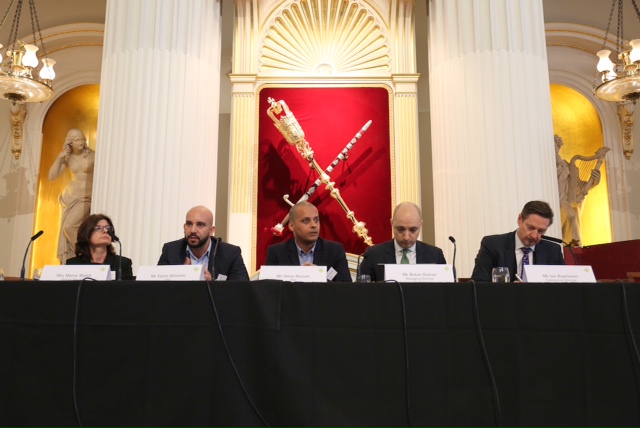 From Bombs to Bytes: How tech can Diversify and Transform Iraq’s Economy

One of the big hits at this year’s Iraq Britain Business Council (IBBC) conference was the tech panel (pictured) with four leading Tech companies using tech to deliver their unique services: Zain Telco, launching Zain Cash, Restrata who offer cyber security to the traditional and emergent digital economy, and Gulftainer, the logistics to connect Iraq to the world of commerce and Inevert, a start-up tech investor.

There is a clear appetite and ambition in youthful Iraq to connect with the modern world and repurpose the Iraqi economy. The digitisation of the Iraqi economy could usefully transform several objectives in one swoop and be a massive agent of positive change:

Prime is the need to diversify the economy away from reliance on oil and gas. Iraq has plentiful supplies of oil but the price is volatile and the country still needs to find employment for millions of young people. Digitising the economy would not only provide hundreds of thousands of jobs, but connect the economy to the modern world virtually and in reality.

A bi-product of tech will enable the rapidly growing young generation, who are numerate and tech friendly, to have engaging jobs and fulfil aspirations, instead of a distractive poverty and extreme ideologies.

Secondly, Tech as a transactional mechanism also drives transparency, especially when money is concerned. Tech bypasses corruption: It’s no secret that Mastercard is seen as a benign influence in eradicating fraud and corruption in emerging economies. Likewise, Zain cash now offer online payments via Facebook for entrepreneurs to sell their products and services.

Not only does this open up e commerce to millions of naturally entrepreneurial Iraqis, but also to people and markets  in the wider region, along with options to pay for advertising and marketing support. All this  without the need to pay middle men or bribes. Tech is ‘the agent’ of transparency, for the people and for government.

Finally, Tech is an agent of cultural transformation and change – as people engage with each other in social media, collaborate in business, and young people learn from educational programs , as Maeve Walsh of UKs DCMS says, the UK Government conducts swathes of its civic, electoral and societal business via the internet. Likewise Iraq can transform government activity within the country, and ‘Iraq Tech’ can also change external perceptions of the country .

What can make this happen?

Much of the infrastructure is already in the country through the private sector: Zain telco and its Zain cash wallet- Restrata have the cyber tech to protect businesses and Omar Hussan of Inevert is eyeing opportunities for investment- along with Zain, who also intend building a tech hub in Baghdad.

Clearly much more investment is required into the emergent start up economy, and despite availability of the free ‘Google skills,’ the government needs to embrace tech education, infrastructure and online transactions- but the private sector can already see entrepreneurial commerce as the driver of change.

With a young and educated population of natural trading entrepreneurs, keen to get on with their lives, it’s only a matter of time before the country leapfrogs less liberal countries in the region. Iraq has been held back for too long, but now could be the time the dynamism of the people, their access to electronic platforms, and relative stability could be the trigger that pivots Iraq into a golden age of tech.