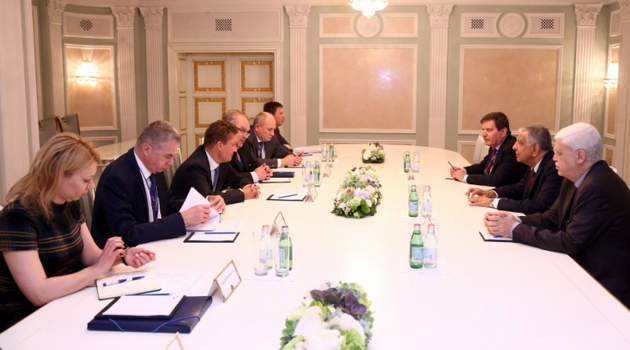 A working meeting between Alexey Miller, Chairman of the Gazprom Management Committee, and Jabbar al-Luaibi, Minister of Oil of the Republic of Iraq, took place in St. Petersburg today.

The parties discussed the Badra project, which is implemented in Iraq by Gazprom Neft. Currently, the Badra field produces as much as 77,000 barrels of oil per day.

Gazprom Neft continues to construct oil and gas infrastructure, with start-up underway for a comprehensive gas treatment unit. The first and second trains of the project will go into operation in the 2nd and 3rd quarters of 2017, respectively.

Gazprom Neft is a vertically integrated oil company focused on oil & gas field exploration and development, oil refining, and petroleum product processing and marketing. The company’s largest shareholder is Gazprom (95.68 per cent); the rest of its shares are in circulation.

On May 31, 2014, Gazprom Neft started developing the Badra field located in the Wasit Province in the eastern part of Iraq. According to estimates, Badra holds 3 billion barrels of oil.

In January 2010, the consortium of Gazprom Neft, Kogas (Korea), Petronas (Malaysia), and TPAO (Turkey) signed a contract with the Iraqi Government for the development of the Badra field following a competitive tender. Gazprom Neft, as the project operator, holds a 30 per cent stake in the project, Kogas – 22.5 per cent, Petronas – 15 per cent, and TPAO – 7.5 per cent.

The Iraqi Government represented in the project by the Iraqi Oil Exploration Company (OEC) holds a 25 per cent stake. The Badra development project’s lifecycle is 20 years, with a possible five-year extension.

The cumulative oil production from Badra is in excess of 5 million tons.

At present, over 3,000 Iraqi citizens work at the Badra field. Gazprom Neft spent upward of USD 12 million on training programs for those workers.