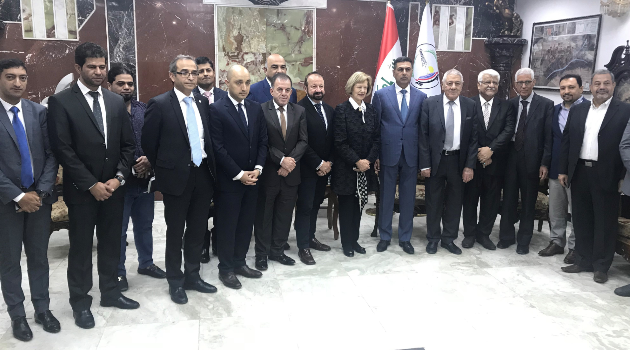 On Thursday 12th October a delegation of IBBC Members, led by Baroness Nicholson, Honorary President, met with H. E. Mr Asaad A., the recently appointed Governor of Basrah. The meeting took place in the Governor’s office, included a Lunch and lasted until the early evening.

The Governor presented his plans for Basrah and asked the company representatives how they could contribute to help achieve his ambitious objectives. IBBC members used the opportunity to introduce their companies and their services to the Governor and to participate in a wide ranging discussion with him.

Mr Rasmi Al Jabri, Deputy Chairman of IBBC, who facilitated the meeting was delighted with its many outcomes. He said that with Mr Edani at the helm of the Governorate the Province had a real chance to develop and modernise. He further commented that IBBC and all of its members stood ready to support Governor in his crucial work.

The meeting was also attended by Dr Ali Nasir and Phil Sherwood of the AMAR foundation.