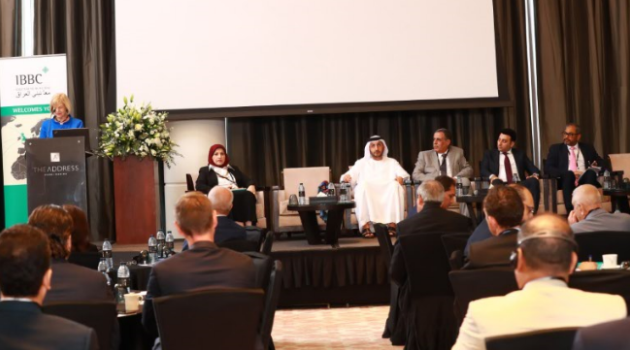 Following on from the first Iraq Britain Business Council conference in Dubai in 2016, the IBBC was delighted to host its Autumn Conference in the UAE once again. The event was strongly supported by the UAE authorities.

Alongside Baroness Nicholson, the UK Prime Minister’s Trade Envoy to Iraq and President of the IBBC, the conference was opened by H.E. Mr. Abdulla Ahmed Al Saleh, Under Secretary for Foreign Trade and Industry, UAE Ministry of Economy.

H.E. Mr. Abdulla reminded delegates that non-Oil & Gas related trade between the UAE and Iraq had already passed 11 Billion USD in 2016, with Dubai in particular being a hub for local and international companies in the region.

H.E. Mr. Abdulla firmly believes that the UAE's role in the rebuilding of Iraq will continue to expand and expressed his wish to cooperate with organisations such as the IBBC to accomplish this crucial task.

Vikas Handa, IBBC UAE Representative and the Managing Partner of the Emirati Company DrillTech, warmly thanked the minister and stated that the IBBC stands ready to work even more closely with the UAE in Iraq.

The conference was structured around several sessions in which the Iraqi officials and international companies operating successfully in Iraq, most of which are members of the IBBC, exchanged their views and experiences.

These sessions focused on strengths, weaknesses and opportunities of the economy in Iraq, Reconstruction & Infrastructure, Transport, Power and Oil & Gas. In parallel, a series of high level round-table discussions between investors and Iraqi Government representatives took place.

The conference included for the first time a presentation on the rapidly developing Tech sector in Iraq , given by the CEO of Zain.

IBBC Managing Director, Christophe Michels, stated that the increasing involvement of the UAE and wider GCC with Iraq was a game changer for the country. The IBBC very much welcomes this development and is delighted to be part of it and support it. The organisation will increase its presence in the UAE and the Autumn Conference in Dubai will become a regular feature in its calendar of events.