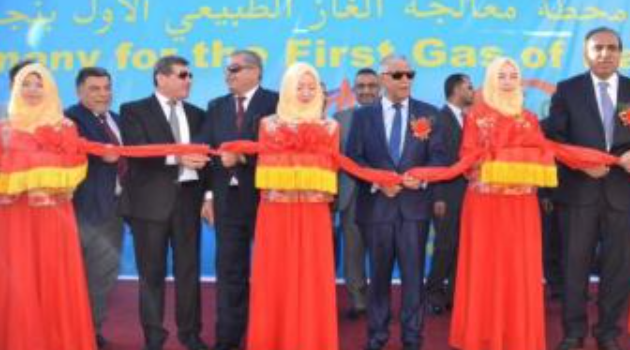 Mr. Al-Luiebi said that the gas investment is a real priority for the ministry of oil to stop wasting the oil wealth and to develop the gas industry in Iraq.

Mr. Al-Luiebi said in his speech during the celebration that the gas treatment project is designed to process two million standard cubic meters of associated gas which means (71) MSCF/ day. The processed quantities of gas will be used to operate the (44) megawatts Maysan power station, in order to operate the production units and facilities in the oil fields and supply the surplus to the national power stations with an average of (60) megawatts.

“We are standing today before and economic edifice and a new accomplishment achieved by the faithful sons of Iraq in general and Maysan in special, and this project is a part of the strategic significant plans of the ministry of oil to invest the associated gas and make use of it in the industry of liquid gas and condensed gas which has become a good economic source of outcome to the federal governmental budget, through the exportation which is being done since two years. In addition to the outcome of the crude oil exportation”.

Mr. Al-Luiebi referred to the accomplishments of the ministry in the sectors of production, exportation and gas industry, which was made through the investment projects by cooperation with the national effort and the international specialized companies. In “dear Maysan” there was many accomplishments, such as the elevation of the oil production to about (480) thousand barrels/ day which can be considered as a big achievement to the governorate within a record time of a few years.

The representative of the Chinese company Inpal said that the project was executed according to the international standards within 18 months and will ensure the investment of large gas quantities to be used in the power station turbines in the field and the national power network.