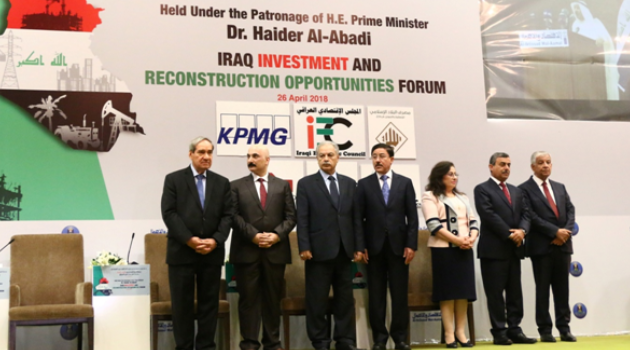 Under the Patronage of H.E Prime Minister, Dr. Haider Al Abadi, organized by the General Secretariat of the Council of Ministers and the National Investment Commission (NIC) in cooperation with Economy and Business Group, the Iraq Investment and Reconstruction Opportunities Forum was held in Baghdad on Thursday the 26th April witnessing a wide local, Arab and international participation.

Dr. Sami R Al Araji, Chairman of the National Investment Commission confirmed in his opening speech that this forum is completing what has been achieved in the Kuwait international conference held last February where 212 strategic and medium  investment project were presented out of 1100 project in the investment map for 2018. This forum gave the opportunity to many businessmen who missed the chance to participate in the conference to discuss new projects in different fields.

It also witnessed singing memoranda of understanding and granting a number of investment licenses. He expressed his happiness for Iraq embracing more than 700 businessmen from public, private and international community.

Dr. Mehdi Al Alaq, the General Secretary of the Council of Ministers greeted the attendees on behalf of the Prime Minster and conveyed his wishes for more success and support for the economic sector to secure a safe investment environment.

He added, the resolutions issued by the Council of Minister before the Kuwait conference event confirmed the Prime Minister’s approached to support this vital sector, pointing at the efforts of the follow up team to organize the official obligations offered by countries and funds as discussions have already started to fulfill their commitment. He also expressed his faith that the next few months will witness a big reconstruction and investment activity supported by the government.

He was open to discuss any difficulties facing investors while he thanked all those who participated in launching this economic forum.

Mr. Nail Al Kabarity, chairman of the Arab Trade Chambers called to invest in Iraq because it enjoys an attracting environment, a promising market, and a governmental support. He added that Iraq needs more support from Arab countries, so the Arab Trade Chambers Union is happy to participate economic partnerships with Iraq in serving the Iraqi people who are the actual wealth in Iraq.

Representing the World Bank, Yara Salim confirmed the Bank commitment to support Iraq in its reconstruction campaign which is part of the international obligation towards Iraq in the Kuwait conference, she is already involved in several projects working on achieving this goal side by side with the National Investment Commission by PIC capacity building and developing investment attracting legislations to create an integrated investment environment. She added that the World Bank is currently working with the Central Bank of Iraq to fund and develop the vital sectors and invest in the human resources.

In his speech, Mr. Hatem Al Qawasmi, the executive partner and founder of KPMG determined three aspects for Iraq’s future: the first is the Iraqi economic features, the second is including the main investment opportunities while the third is a presentation of what his institution can offer Iraq.

He explained some of the strategic features of developing the Iraqi private sector for the next ten years due to its ability to develop the local economy and compete with counterparts in the region by developing the organizational structures for the state owned companies to cope with the new economic reality.

The first opening session included the Executive Chairman of Economy and Business Group Mr. R. Abo Zaki’s speech where he mentioned that Iraq is on the cross line at the present time, leaving behind years of war and destruction, looking forward a prosperous future and needs a long term economic plan that enhances investment in the private sector to work effectively with the international economy.

Six investment licenses were granted during the form, four of them were granted to DICO International Holding LTD (British) to develop the three main central malls in Baghdad while the forth was for Al Muftiya project in Basra Province (housing, recreational, commercial). The fifth and sixth licenses were granted to Al Ghaith Co. (UAE) to establish the Sodium hydroxide plant and food salt factory in Muthana Province.

The National Investment Commission singed three memoranda of understanding with investor Jawad Abo Khamees (Kuwaiti) to build hotels, service and commercials centers in Baghdad, Karbala and Saladin Provinces. A forth memoranda was singed with Qeewan Group and Jawad Al Qasab to build five stars hotel and a mall in Baghdad, while the fifth one was singed with Al Arabiya for Airports and 21st Century for Satellites Co.s.

The sixth and seventh memoranda were signed with Majd Al Ardh to build the economic zone in Baghdad and Dr. Rafii Ibrahim Al Rawi to develop Al Andalus Oncology Hospital in Baghdad.

The first session under the title (Partnership in Investment) attended by Mr .Ali Al Alaq, the Governor of the Central Bank of Iraq, Mr. Wadee Al Handhal, Chairman of the Private Iraqi Banks, Mr. Ahmed Al Qadhi from EY and Mohamed Al Mutawaa from Al Baraka Group where all discussed funding the infrastructure projects, foreign and Arab investment experiences in Iraq and partnership potentials with Arab and foreign countries.

The second session included the General Secretary of the Council of Minsters Dr. Mehdi Al Alaq speech regarding the procedures aiming at improving the investment environment in Iraq. Dr. Sami R. Al Araji presented the most important investment opportunities. Also there were two other speeches for Mr. Ahmed Al Wakeel and Saib Nahhas.

30 companies from public and private sector were represented in an exhibition along with the forum showing available opportunities in both sectors.

A number of ministers (Oil, Planning, Reconstruction and Housing, Trade, Central Bank of Iraq) attended the event in addition to a high level diplomatic representation for 30 Arab and foreign countries including ambassadors, vice ministers, director generals, economic organizations and representatives of the Iraqi private sector.

One Response to Iraq Investment and Reconstruction Opportunities Forum