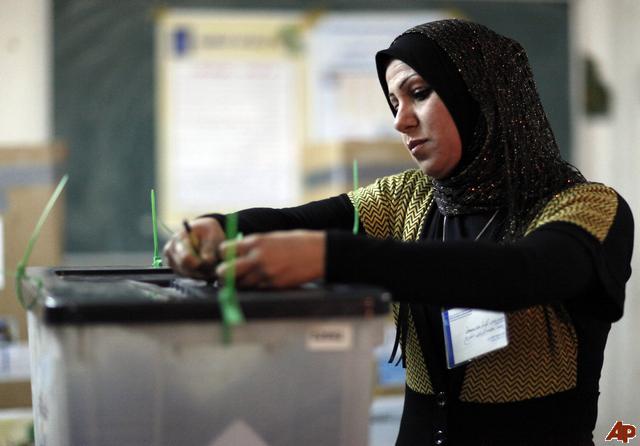 Iraqis are heading out to the polls this week, and the Independent High Electoral Commission (IHEC) said it is making sure everyone who is eligible to vote will have the opportunity. At the same time, IHEC says a new electronic, fingerprint-based voting system will keep out everyone who's not eligible.

IHEC is opening polling stations on May 10-11 for Iraqis living outside the country and on May 12 for the 24 million potential voters inside Iraq. Officials have no estimate of how many Iraqis outside the country are expected to participate. The legislative election will be Iraq's first since the Islamic State (IS) invaded in 2014. Baghdad has declared victory over IS, but more than 1 million Iraqis remain displaced in Iraqi camps.

In the elections, almost 7,000 candidates are competing in Iraq's 19 provinces for 329 parliamentary seats. Some candidates launched their campaigning before April 10, which IHEC chairman Maan al-Hitawi told Al-Monitor violated the electoral rules.

Several complaints have been made so far to the IHEC regarding electoral rules violations. In March, all Iraqi political parties signed a UN Electoral Charter of Honor regarding campaigning. “The political blocs signed the charter," Hitawi said, "but alas, they didn't abide by it.”

Electoral rules violations aren't surprising in countries such as Iraq, with no long history of democracy and elections. Most of Iraq's political parties have presented no plans for how to improve the government, so they sometimes violate election rules, trying to gain an advantage over their rivals. Baghdad municipal officials noted several instances of parties hanging posters and banners where such signage isn't allowed.

When such violations occur, offenders receive a warning. If they don't remedy the situation within three days, they are fined 2 million dinars (about $1,700). Fines increase for repeat offenses. “If they violate the rules a fourth time, they will be excluded from the elections. So far, we have fined 100 candidates, but none were excluded,” Hitawi said.

Several prominent Sunni and Shiite figures, such as Atheel al-Nujaifi (Sunni) and Muqtada al-Sadr (Shiite), expressed concerns about the potential for more serious offenses such as vote-buying or misuse of voter ID cards. Some activists are even saying they expect massive fraud. But Hitawi said claims about rigged elections are baseless. “Our role in the IHEC is to get rid of any concerns, doubts or rumors about fraud. We have introduced technology to preserve the integrity of elections and reassure everyone that rigging them is impossible,” Hitawi said.

“Our teams have monitored the process and called on anyone who has proof of votes being bought to present [it], but so far no one has filed a complaint or submitted any document proving that candidates are buying votes or voter [IDs],” he added.

There was evidence that IS intended to interfere with elections. IS claimed responsibility for the killing of Farough al-Jobouri, a candidate from al-Watania Coalition, on May 7. Also, the Iraqi intelligence agency double-checked electoral data in Mosul after some refugees returned there. Hitawi said agents found IS affiliates listed in the records and “ended up revoking 20,000 electoral [ID] cards."

Such diligence should allow elections in Mosul to proceed normally, the same as in other provinces, he said. There are 2.3 million citizens in Mosul eligible to vote.

Across the nation, Hitawi anticipates that 50% to 60% of eligible voters will participate in the election. That projection is similar to figures for the 2014 elections, when 60% participated. However, the battered economy in Iraq and widespread criticism of the government and parliament might affect that rate significantly.

Activists have called for election boycotts because many would-be voters remain displaced. Also, some clerics have declared that just stepping into a polling station would be a sin, as voters' presence would help cover up corruption and vote-rigging.

So far, only 48% of the 24 million voters in Iraq have updated their ID cards as had been required, according to the head of IHEC. But to increase the voting rate, IHEC announced it will accept old cards as well, "because 24 million voter cards cannot be updated in a short time; it would take years,” Hitawi said.

Among all Iraqi voters, 400,000 internally displaced persons are eligible to vote. Hitawi said IHEC is prepared and employees will have voting equipment ready in areas where the displaced are staying.

For the first time, Iraq is using an electronic voting system. IHEC paid $135 million for the Miru system from South Korea. There have been several complaints about this system, as some Iraqi figures claim that it's not trustworthy and the server can be hacked by foreign countries.

But Hitawi disagrees. Miru was selected from among nine international companies that submitted tenders. Miru met the conditions and specifications, and UN technology experts confirmed that Miru has what Iraq needs for a successful election process.

The Miru server is in Baghdad at IHEC headquarters. Hitawi believes the data is fully encrypted and protected. “No hacker will be able to reach the carrier because they would need over 240 hours of continuous work to decrypt over 2,000 [programming] codes. They won't be able to do anything, especially since it takes the data only one hour to travel from earth stations and reach the carrier through satellites, which is not enough time for hackers to get in,” Hitawi said.

There will be 56,000 polling stations. More than 250,000 mostly temporary IHEC employees will run the election. Hitawi is confident that the Miru system will prevent any human intervention or manipulation at polling stations.

“The electronic devices will be counting and sorting at the polling stations without any human intervention, so forgery is impossible — and those who claim the elections are rigged only want to undermine the IHEC and are possibly driven by internal and external parties that have no interest in holding the elections,” Hitawi said.

IHEC will announce the preliminary results within 48 hours, as it only needs 24 hours to receive all data from polling stations inside and outside of Iraq, according to Hitawi.