By Editor on 13th May 2018 in Healthcare, Security

Bright and early last Saturday morning, runners in the Washington, DC area took off when the starting gun fired.

It was the sixth annual IN THEIR SHOES 5K for Iraq's most vulnerable children.  This year, for the first time, the US-based 5K was joined by a "sister" 5K in Basra, Iraq, hosted by BP.

Veterans, Iraqi-Americans, diplomats, businesses, children, and families all joined to raise awareness and support for Iraq's orphans, street kids, and displaced children.  The result?  A record $59,000 was raised to deliver tutoring, legal protection, nutrition, health care, and childhood fun to some of the most vulnerable and at risk kids in Iraq.

Joined by Iraq's Ambassador to the United States Fareed Yasseen, the three Youth Ambassadors for the 5K - Humoody, Teeba, and Ala'a - served as the faces and voices of children back in Iraq.

Team Teeba won for the largest 5K team with 33 registered, and the Iraqi-American Young Professionals (IAYP) came in second with 23.  Tim Reilly and Veronica Scott took home trophies for first place in the men and women's division.

Looking for your race time?  Check here.  Pictures of the event?  Check out recent posts and an album on our ICF Facebook page.

The race was followed by an after party with music by Salaam Band, dancing,  and Iraqi food.  Our friends at Old Town's Casa Rosada Artisan Gelato provided free gelato for everyone, and there was face painting and balloon animals for the kids.  At a table hosted by Kids Giving Hope to Kids, special drawings were made for Hope Bus kids in Baghdad

To each of you who ran or walked, donated or volunteered, the Iraqi Children Foundation (ICF) expresses its deepest appreciation.  Thanks for being a part of the team to deliver love and hope to Iraq's children! 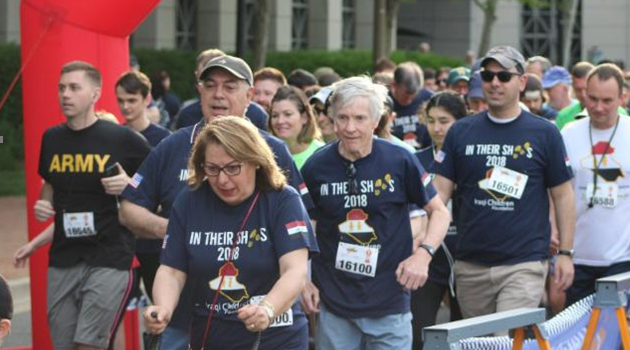 One Response to Running for the Children of Iraq