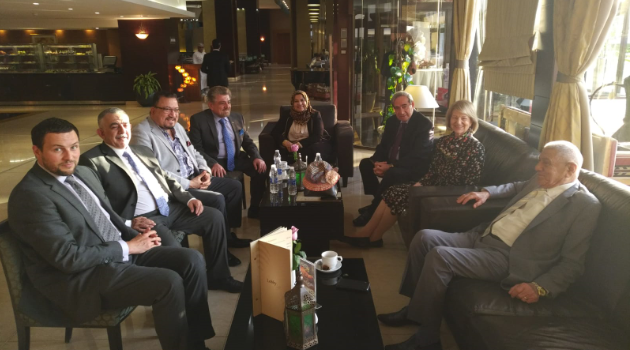 The IBBC management first attended a religious tolerance seminar and Iftar dinner on 2 June organised by the AMAR Foundation in Baghdad, where numerous representatives of different religious groups in Iraq were present, as well as notable academics, journalists and artists. The dinner was preceded by a meeting with the Chaldeen Patriarch.

Meetings were held on 3 June with H.E. Mr Kadhim Finjan, Iraqi Minister of Transport together with  IBBC Member representatives from Serco, G4S, Al Burhan Group and Menzies Aviation at Adnan Place in Baghdad, where constructive talks were held on further cooperation in the civil aviation industry.

The IBBC team also met Dr Barham Salih, former Prime Minister of the KRG and former Deputy Prime Minister of the Government of Iraq and founder and leader of the Coalition for Democracy and Justice. Dr Barham Salih is a long-time friend and associate of the Iraq Britain Business Council and will be attending the IBBC Weekend Retreat at Cumberland Lodge in Windsor Great Park from 6-8 July.

In the late afternoon of 3 June IBBC hosted a meeting for its members at the Babylon hotel. The meeting was joined by Dr Sami Al Araji, Chairman of the National Investment Commission, Professor Sabbah Mushatat, Advisor to the Prime Minister and Eng. Dara Rasheed, Deputy Minister for Housing, Construction & Public Municipalities and Deputy Head of Refaato (Reconstruction fund for areas affected by terrorism https://www.refaato.iq/en/) .

IBBC also visited The Station in Baghdad during their visit, which is the first combined workspace in Iraq, providing tech and artistic entrepreneurs with a communal space and resources to develop and expand business projects. This exciting initiative is a boost to a small but growing number of young Iraqis willing to engage and develop the private sector in Iraq. The building itself is a landmark of modern architecture in the heart of Baghdad. For more information please visit: http://the-station.iq/.