By Editor on 9th October 2018 in Ahmed Tabaqchali, Investment

The uncertainty that has prevailed over all economic activity during the last few months is finally coming to an end in a typical Iraqi fashion- extremes of either feast or famine. The parliamentary elections in May, having yielded no clear winner, led to a multi-month paralysis during which the election results were contested in court, subsequently leading to a partial recount of the votes.

Increasing the election anxiety were massive demonstrations in Basra and the southern governorates, where citizens demanded reform and investment into basic services, and the proverbial shaking of the political class by raising fears that they would spread throughout the country. Thoughts on the protest movement and its implications are further discussed in, (The Protest Movement, the Politicians and the Elections).

The end of the uncertainty came in early October with the appointment of a president, and a prime minister in quick succession. This was done at a speed almost unheard of in post-2003 Iraq. While the individuals are two of Iraq’s most accomplished politicians with a lot of promise, the important takeaway is that the process of selecting them broke the mould and ended the political gridlock that bedevilled the country since 2003.

This was a continuation of the effects of the same 2015 protest movement that had such a profound effect on how the elections were fought and their subsequent results. The most visible effect was the fragmentation of the prior ethno-sectarian monolithic blocs that dominated over the past 14 years, the root cause of Iraq’s political and social instability since 2003. It is the end of this gridlock that holds the promise for change in Iraq and with it begins the unlocking of the massive reconstruction drive that lies at the heart of the Iraq investment opportunity.

This is made significantly easier for the upcoming new government as the windfall from higher oil prices (based on the year-to-date average Iraqi oil price of USD 65/bbl) could imply that Iraq would have a two-year cumulative surplus of USD 24.5bn, or the equivalent of a 19% stimulus for non-oil GDP by the end of 2018. Conservative assumptions for Iraqi oil prices for 2019 of USD 59/bbl would imply a further surplus of USD 9.3bn by end of 2019, but if Iraqi oil prices were to remain at the current average price then the 2019 surplus could easily double to USD 18.6bn.

The implications of a three-year cumulative surplus of USD 33.8 - 43.1bn by end 2019 are enormous for Iraq’s ability to plan the funding of the reconstruction and to address the country’s structural imbalances. The assumptions above don’t assume that the current rally in oil prices is sustainable, but that Brent would stabilize at about USD 65-70/bbl from the current USD 84+/bbl (Iraqi oil tends to sell at a discount of USD 5/bbl).

However, this is at least a few months away as the new government is unlikely to be formed before the middle of November and as such would not be able to take any action before year end. Given that, the county is in the mildest of the 40-day Arbaeen pilgrimage, the timing of the new government’s spending programme would coincide with the return of activity following the Arbaeen pilgrimage -hence the earlier reference to the extremes of feast or famine for Iraq’s economy.

The market followed through with its longer-term bottoming process as the July interim bottom continued to be tested this month, in-line with the same trend seen in August and will likely continue for some time. The market, as measured by the Rabee Securities RSISUSD Index was down -4.8% for the month and -10.5% for the year. Average daily turnover declined significantly for the month to the lowest levels (by a wide margin) for a number of years as can be seen from the chart below. 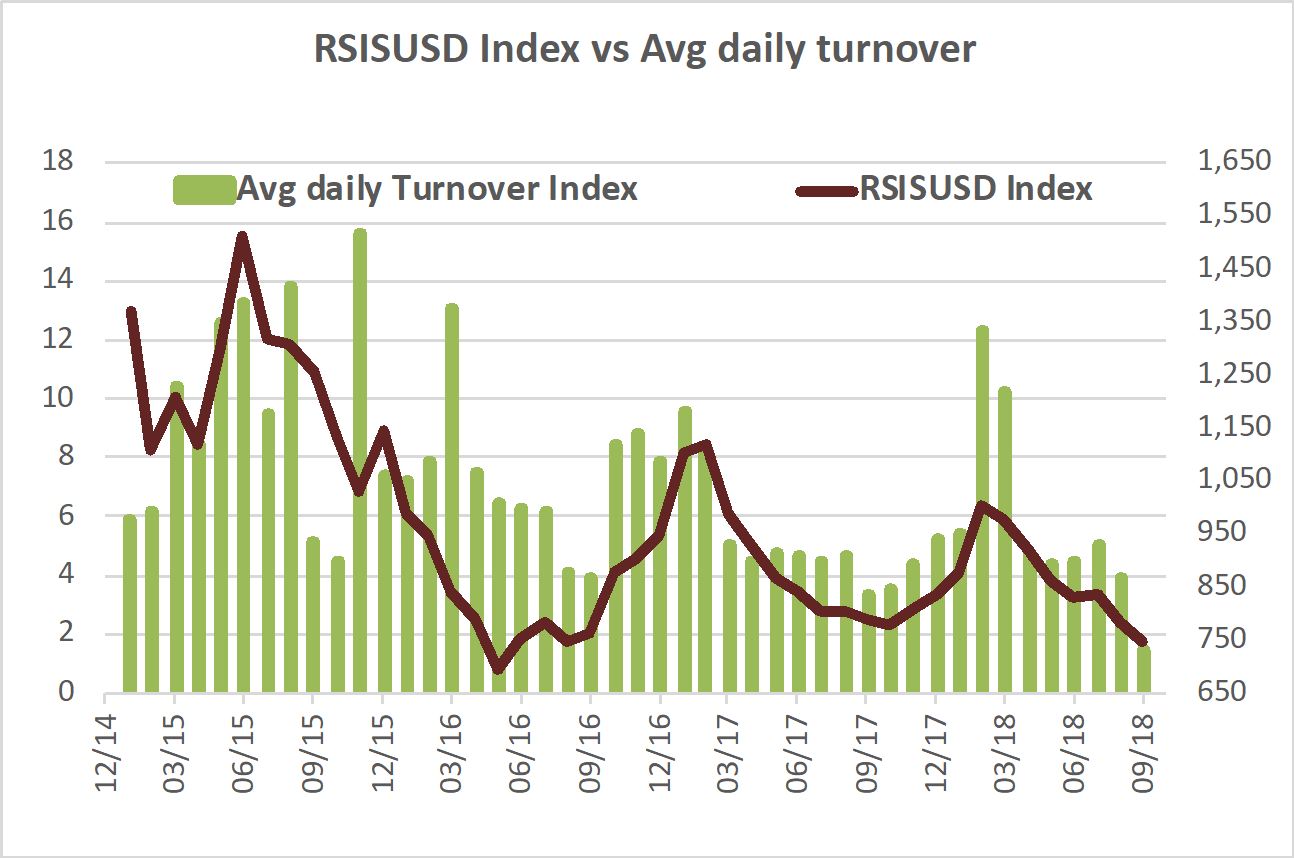 The poor market action over the summer months should be seen in the perspective of the low turnover coupled with the continuation of the demonstrations that began in July, the prolonged uncertainty over the governments formation and finally the 40-day Arbaeen pilgrimage that brings the country to a standstill as millions of pilgrims take part in “the largest annual gathering of people anywhere on earth.”

However, the low activity was not without fireworks as a sell-off by a foreign investor in Mansour Bank (BMNS) set off a frenzy of trading activity in a replay of the sell-off in the Bank of Baghdad (BBOB), as reported in July’s update “Of Frenzies & Market Bottoms”. At the worst point BMNS, was down -40% for the month and its market capitalization was equal to about 0.5x Book Value, 17% of assets and 22% of cash (based on trailing 12-month numbers). In an exact replay of the events with BBOB, once the position was liquidated locals and some other foreigners bought the stock which sent it up +27% to end the month down -24%, and -10% for the year.

However, the financial position of BMNS during the past few difficult years is almost the mirror opposite of BBOB. BBOB suffered from the same forces that crushed the sector’s earnings, as reviewed in (Of Banks and Budget Surpluses), in addition to its share of company specific issues and structural weaknesses that were exposed by the pains of 2014-2017, including the recent pressure on FX margins. BMNS on the other hand, weathered the storm mostly unscathed as seen below, and in particular it’s in a strong position to reap the rewards of a recovery given its strong deposit growth, low loan/deposit ratio, and low ratio of non-performing loans (NPL’s) to deposits.

As explained “Of Banks and Budget Surpluses”, the banks’ leverage to the economy crushed their earnings. In particular, the double whammy of the ISIS conflict and the collapse in oil prices squeezed government finances as expenses soared while revenues plummeted. The government resorted to dramatic cuts to expenditures by cancelling capital spending and investments which, due to the centrality of its role in the economy, led to year-year declines in non-oil GDP of -3.9%, -9.6% and -8.1% for 2014, 2015 and 2016, respectively. Ultimately, the government had a cumulative deficit of around USD 41bn during this period and accumulated significant arrears to the private sector in the process.

The same leverage should work in reverse as the potential budget surpluses of USD 33.8 - 43.1bn for 2017-2019 should have a simulative effects on economic activity which ultimately should translate to stronger future earnings for the banks. These were discussed in further details in: “Forget the Donations, Stupid.”

BMNS’ financial performance during the years of conflict can be seen through the three charts below that look at loans/non-performing loans (NPL’s), deposits and trade finance and their association with budget surpluses/deficits. BMNS’ loan and NPL data as supplied by the research team at Rabee Securities is gratefully acknowledged, while other data was taken from the Central Bank of Iraq. Data from 2010-2014 are based on Iraqi accounting standards, while data from 2015-2017 are based on IFRS, and all calculations uses the official USD/IQD exchange rate.

BMNS’ loan book growth peaked in 2015 at the same time that NPL’s peaked. Unlike many other banks in the sector, its loan book was almost flat during 2015-2017 and NPL’s as a percentage of loans declined by almost 50%. At the same time BMNS increased its provisions significantly at almost twice the NPL’s in 2017. 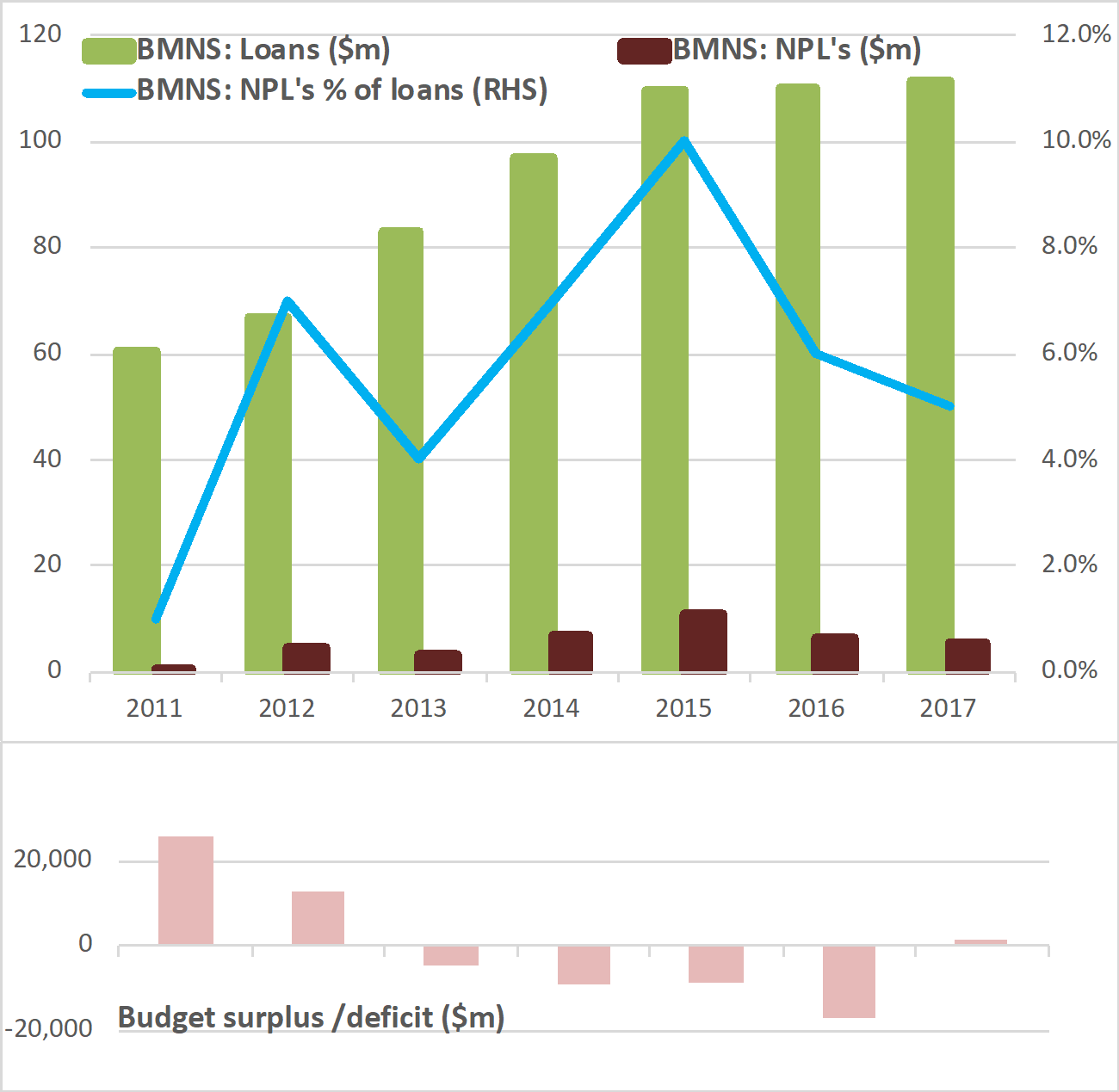 Unlike, almost all other banks in the sector, BMNS experienced deposit growth throughout the crisis with growth accelerating during the relative stability in 2017. A flat loan book and sharply increasing deposits resulted in a very low loan/deposit ratio allowing BMNS the opportunity to grow its loans book. Moreover, most of these loans are collateralized by property as most banks’ loans are in Iraq where the norm is for collateral value at 2x the loan. 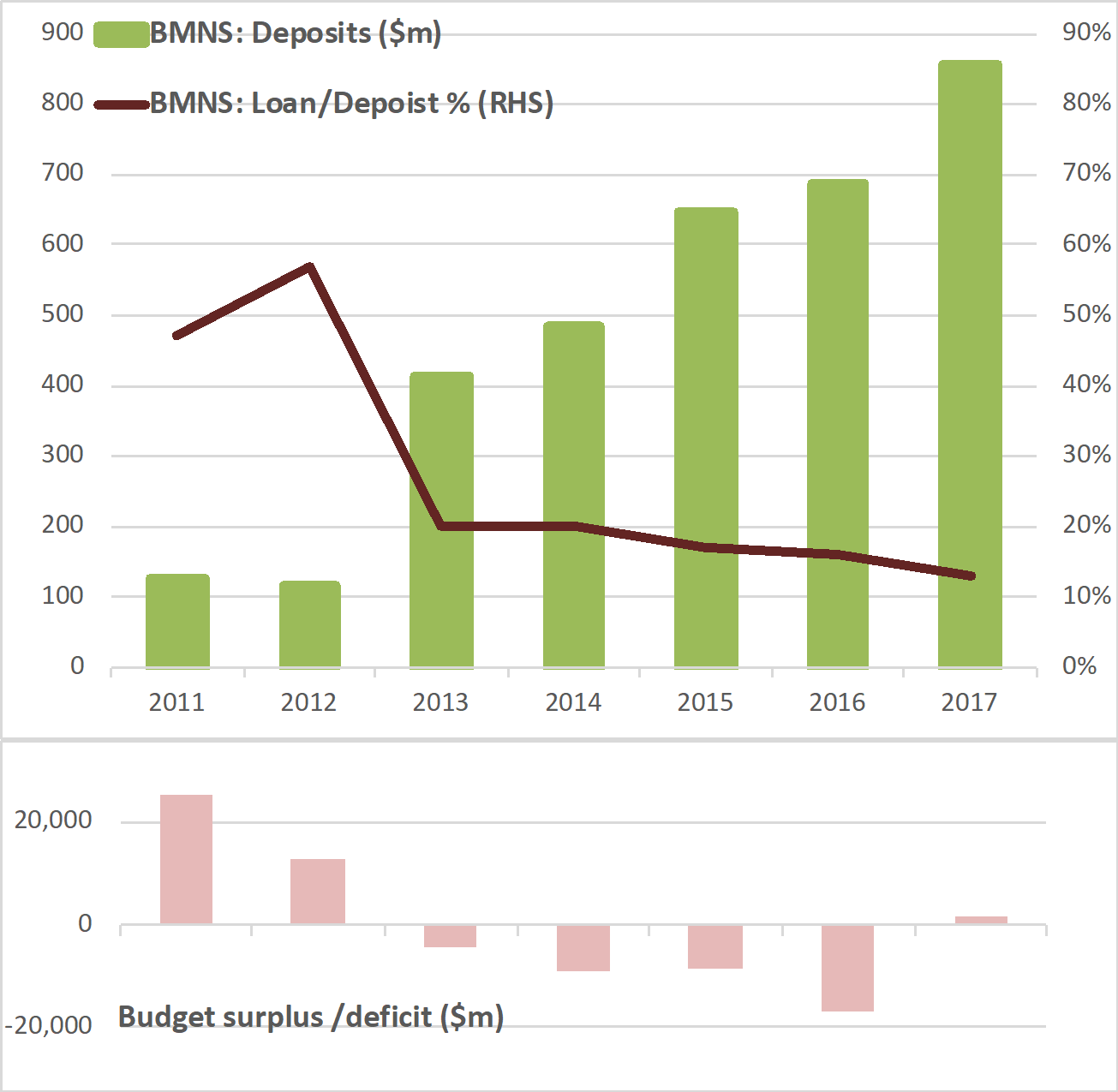 BMNS’ trade finance declined, however, at much lower rates than those experienced by the sector, while the damage to BMNS’ earnings was mitigated by the relatively small size of the business. 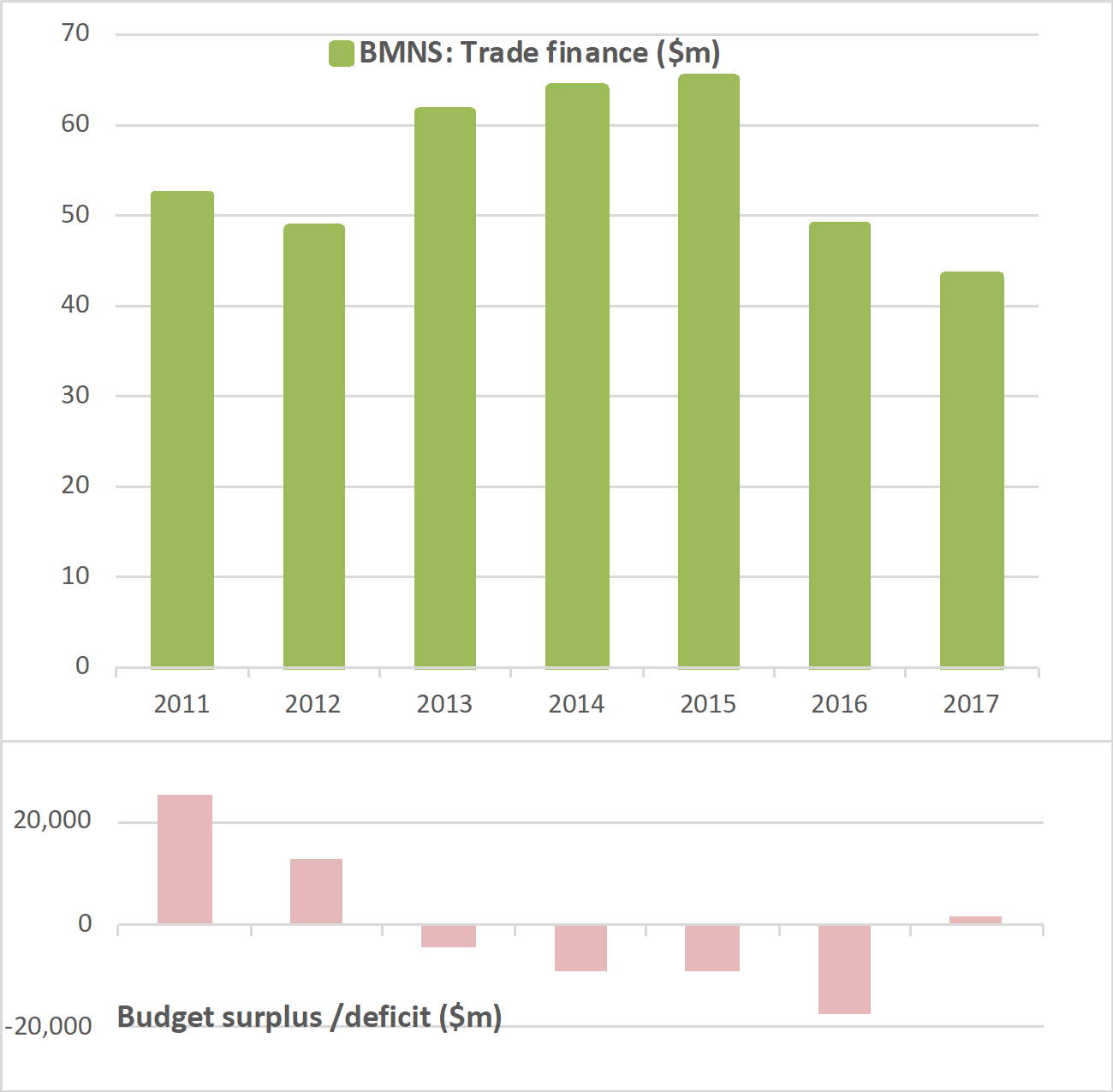 It’s logical to conclude that the sea change which has taken place in the government’s financial health would reverse the trends that affected the banking sector’s earnings as the significant stimulus to non-oil GDP should lead to sustainable economic activity which should provide the sector with room to recover. Given BMNS’ strong position relative to other banks, it should have an opportunity to grow much faster than the sector as a whole.