By Editor on 3rd August 2018 in Ahmed Tabaqchali, Investment

The market, as measured by the RSISUSD index, marked an important bottom in July as part of a likely bottoming process. The multi-month bank selling shifted into high gear. This intensified into a frenzy, climaxing by the middle of the month with the liquidation of a large foreign position in the Bank of Baghdad (BBOB) – one of the top banks on the Iraq Stock Exchange (ISX). At the worst point in July, BBOB and the index were down -24% and -12% respectively for the month, after which both reclaimed these losses to end up +2.4% and +0.5%.

The selling in the banking sector over the last few months, driven by concerns over declining FX margins (as explained here in the past), was paced by consistent foreign selling in BBOB. The size of the selling exaggerated the stock’s declines which had a knock-on effect on other banks which declined in-tandem and dragged the market with them given the sector’s dominance of trading on the ISX.

Local retail trading is dominated by speculators, yet locals tend to appreciate the true values of local assets especially at extreme valuations. At the worst point, BBOB’s market capitalization was equal to about 0.3x Book Value, 8.5% of assets and 15% of cash (based on the trailing 12 months) which would suggest that the stock was discounting some sort of end of the world type event. The locals, aware that such a catastrophe was not around the corner and that the decline was a function of a portfolio liquidation, raised funds from family, friends and banks in order to buy BBOB. Joined by a few foreign investors, undoubtedly aware of the same valuations, the combination absorbed all the significant selling, after which the stock began to climb.

Irrespective of BBOB’s strong position among local banks, it too suffered from the same forces that crushed the sector’s earnings, as discussed in last month review of banks (Of Banks and Budget Surpluses). Furthermore, it had its share of company specific issues and structural weaknesses that were exposed by the pains of 2014-2017, including the recent pressure on FX margins. The bank’s focus on addressing these weaknesses at the expense of revenue growth is hindering near term growth. However, given the quality of its management, strong position with high quality customers (in particular foreign companies) and the strength of its franchise, it should emerge in a position to resume growth in the recovering economy.

As explained last month, the banks’ leverage to the economy crushed their earnings. In particular, the double whammy of the ISIS conflict and the collapse in oil prices squeezed government finances as expenses soared while revenues plummeted. The government resorted to dramatic cuts to expenditures by cancelling capital spending and investments which, due to the centrality of its role in the economy, led to year-year declines in non-oil GDP of -3.9%, -9.6% and -8.1% for 2014, 2015 and 2016 respectively. Ultimately, the government had a cumulative deficit of around USD 41bn during this period and accumulated significant arrears to the private sector in the process.

The same leverage should work in reverse as the expected budget surpluses of USD 28.5bn for 2017-2019 should have simulative effects on economic activity which ultimately should translate to stronger future earnings for the banks. These were discussed in further details at: “Forget the Donations, Stupid.”

For BBOB, the changes for the worse during the years of conflict can be seen through the three charts below that look at loans/non-performing loans (NPL’s), deposits and trade finance and their association with budget surpluses/deficits. BBOB Data as supplied by the research team at Rabee Securities is gratefully acknowledged. Data from 2010-2014 are based on Iraqi accounting standards, while data from 2015-2017 are based on IFRS.

BBOB’s loan book growth peaked in 2015, while NPL’s grew at the height of the crisis in 2016. The sharp decline in the loan book since then exaggerated the growth of NPL’s as a percentage of loans, as NPL’s declined in absolute terms marginally in 2017 vs. 2016. 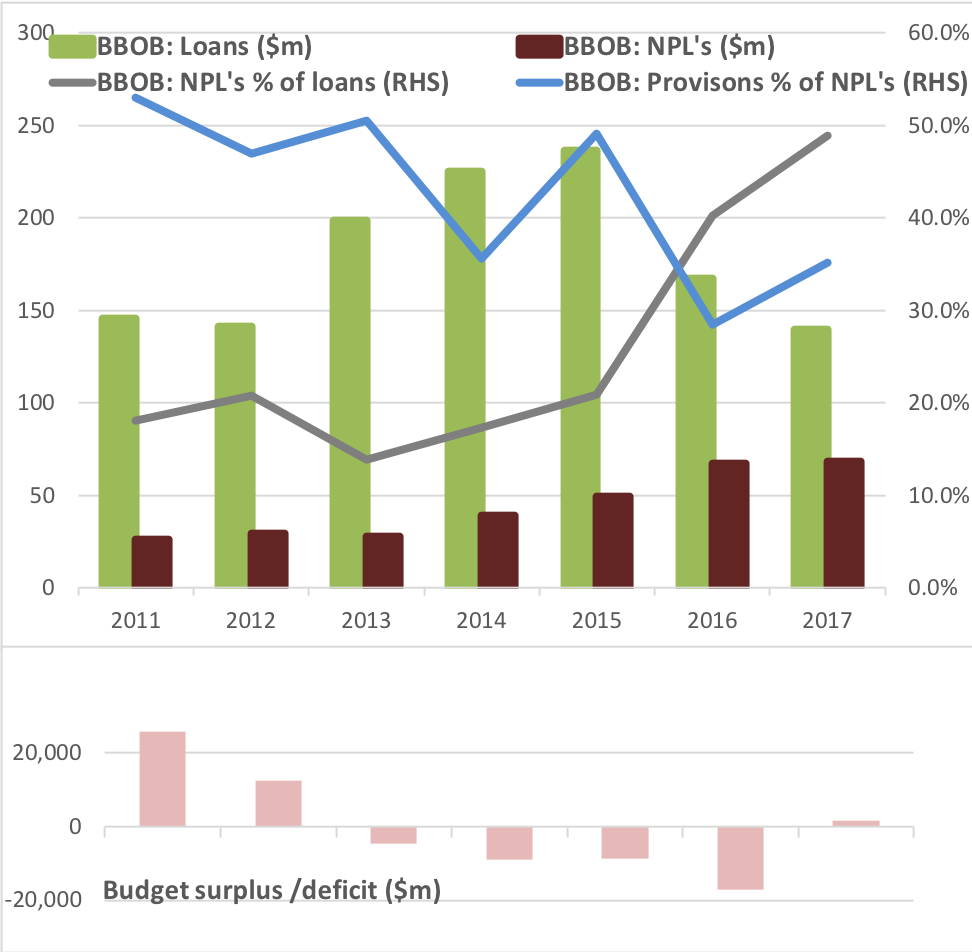 Though NPL’s are relatively high, even during the relative boom times, loans as a percentage of deposits have been very low at the mid-20%’s level as can be seen below.  Moreover, most of these loans are collagenized by property as most banks’ loans are in Iraq where the norm is for collateral value at 2x the loan. BBOB’s relatively large NPL’s were a function of the relative size of their loan book which meant a larger exposure to riskier loans taken during the boom years. 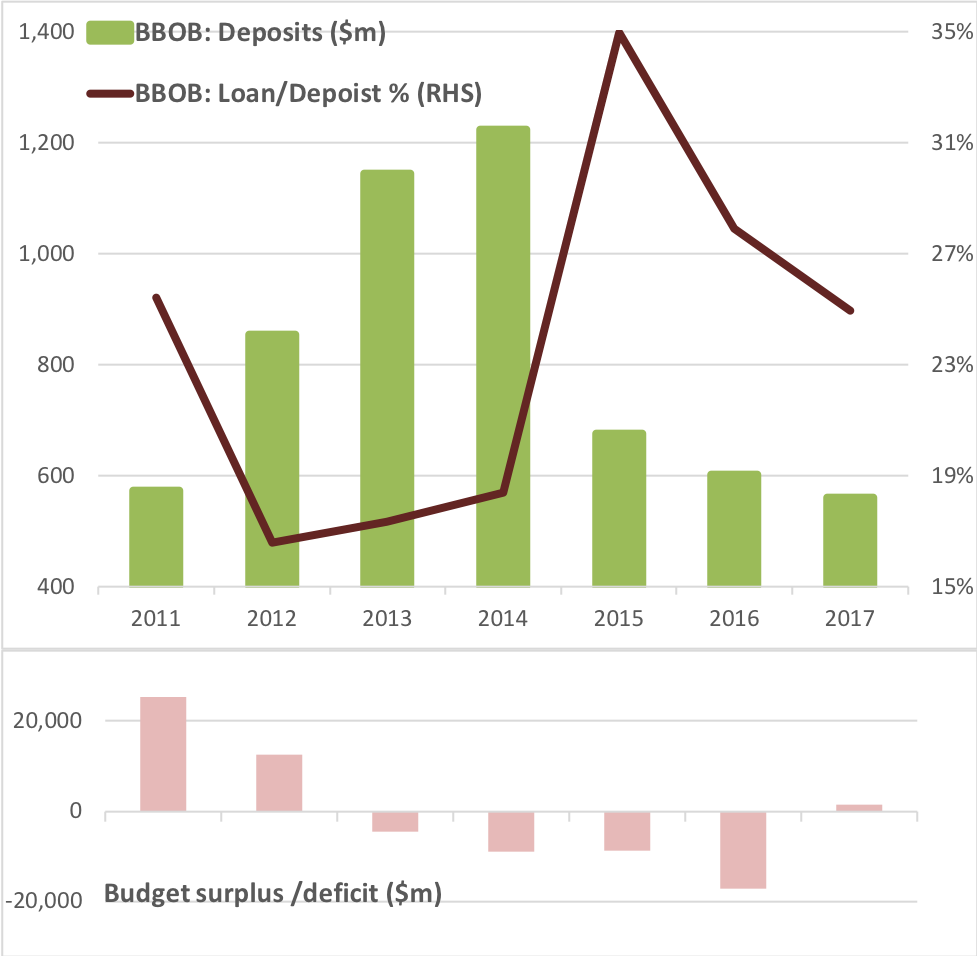 The decline in deposits as a function of the economic contraction was made worse by the decline in BBOB’s trade finance business as that meant the loss of funds deposited as partial collateral required for the provisioning of trade finance.

Trade finance, once an engine of growth for the bank suffered as a result of the sharp economic contraction brought about by investment cuts and the slowdown in consumer spending. 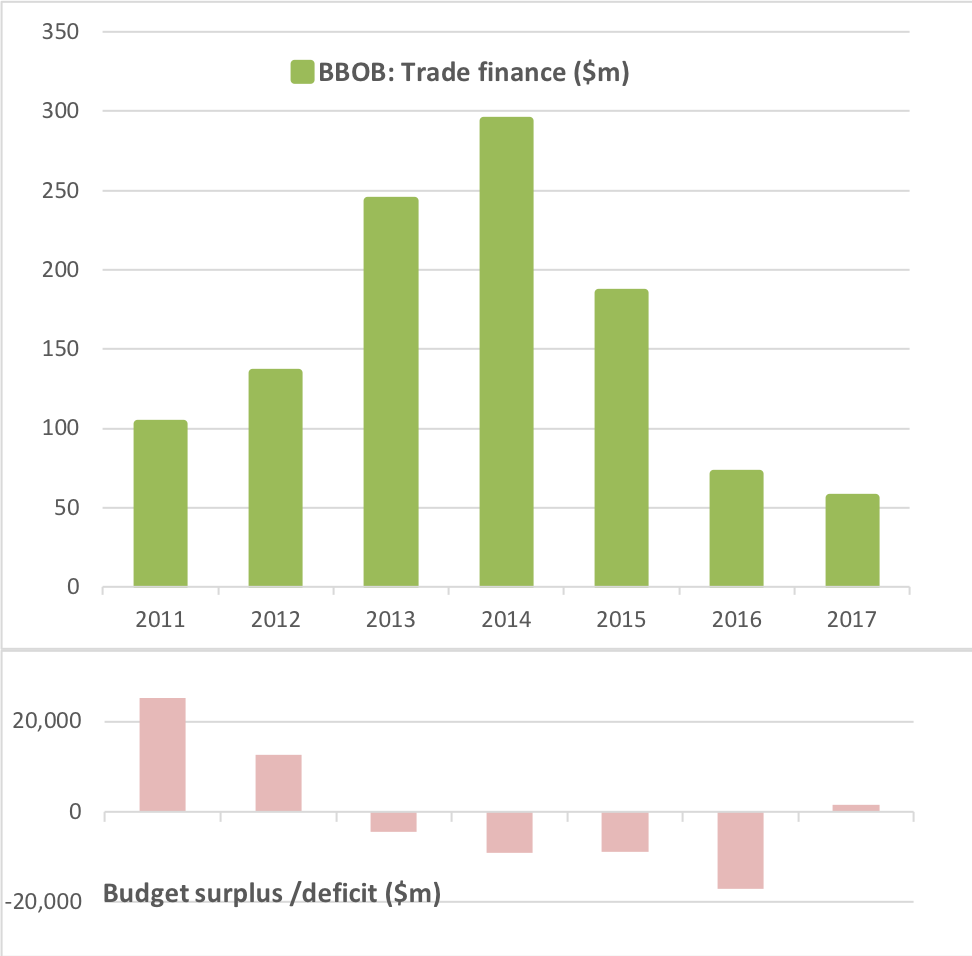 It’s logical to conclude that the sea change which has taken place in the government’s financial health would reverse the trends that affected the sector’s earnings as the significant stimulus to non-oil GDP should lead to sustainable economic activity which would provide BBOB room to recover, address its weaknesses and grow.

The question- when will these budget surpluses find their way into the economy through government action- has been partly answered by the government’s response to nationwide protests that erupted in early July, demanding the provision of services. The first response was to allocate USD 3bn to the city of Basra to fund long delayed infrastructure projects, a USD 669mn injection into the country’s housing fund to provide about 25,000 housing loans, plus a number of smaller projects in the southern governorates.

The eruption of protests in the city of Basra and their spread across the southern governorates right to Baghdad has, as is the usual case in all Iraqi events, led to two polar views. The first dismisses these as the usual ritual of summer protests ignited by the scorching heat that would soon settle with a few government handouts and the end of summer - echoing perhaps an old Iraqi politician who likened Iraqis’ anger to effervescent salts that erupt with a great fanfare before settling down. The second warns of the emergence of instability given that the Iraqi political establishment is incredibly slow to change its bad old habits, if at all, but that the young angry population is running out of patience.

While both arguments have merit, current protests should be seen from a wider prism in that they are the fourth instalment of a protest movement that began in 2010 and developed in both scope and maturity. The last incarnation in 2015 had a profound effect on how the election was fought and its ensuring results, as it led to the break-up of the ethno-sectarian monolithic blocs that were dominant over the past 15 years and which were at the root of Iraq’s instability. Thoughts supporting this line of thinking appear in (The Protest Movement, the Politicians and the Elections).

The influential religious leadership has supported the protest movement calling for the quick formation of a government focused on meeting the demands of demonstrators. This should hasten the formation of the government ending the current uncertainty. However, irrespective of how it is formed, the government would have the financial wherewithal to start the reconstruction of the country and the provisioning of infrastructure in the form of cumulative two-year budget surplus of USD 18.8bn by end of 2018- equal to a stimulus of 14.5% of non-oil GDP once reconstruction projects are underway. These would be enhanced by potential budget surplus of USD 9.3bn in 2019 or a further 6.8% stimulus to non-oil GDP. (Details available in a recent article).

It worth noting that while Iraq has its share of challenges, none are unsolvable in that the key issue of the last few years has been a sequence of crises that have forced successive governments into short -term solutions without providing overall long-term solutions. For instance, the current demonstrations were started by anger over the lack of electricity coverage beyond a few hours each day. Yet, “of 26 gigawatts installed generation, theoretically enough to meet the current 23 GW of demand, less than 17 GW is operable because of lack of fuel, maintenance and transmission capacity: source.” As such, these are addressable in a reasonable timeframe by a focused government with a clear mandate which could emerge given the current pressures from the electorate supported by the religious authority.

Finally a report on Iraq’s debts addresses a number of misconceptions on its debt profile that would have a huge implication for its ability to fund the needed reconstruction and the provisioning of services is here (Understanding Iraq’s Debt).