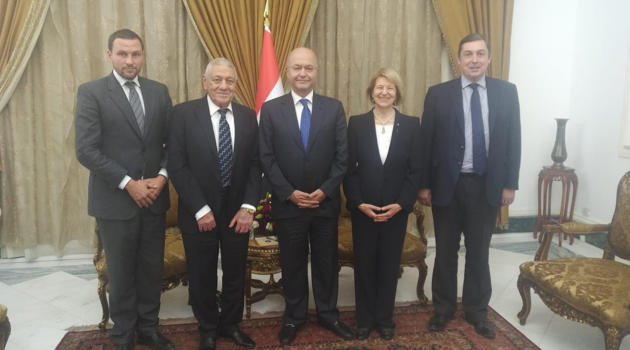 The delegation visited soon after the election of President Dr Barham Salih, who took time out of his busy schedule to meet Baroness Nicholson and the IBBC leadership who were joined by HMA Jon Wilks. Dr Salih has been a close friend of the IBBC for many years and recently spoke at the IBBC Cumberland Lodge Conference in July.

On Sunday 7 October the delegation held meetings with the Governor of the Central Bank of Iraq, Mr Ali Mohsen Ismael Al Alaq, H.E. Mr Adbuallah Luabea the Deputy Minister of Transport, Mr Fayadh Neema, Senior Deputy Minister of Oil and Dr Sami Al Araji, Chairman of the National Investment Commission. The delegation were hosted by the Iraqi Federation of Chambers of Commerce in the evening for dinner.

Before leaving Iraq, Christophe Michels visited Serco, who are working with the Iraqi Civil Aviation Authority at Baghdad International Airport. Serco supports the Iraqi authorities in managing the entire spectrum of air traffic control in Iraq including the increasing number of international overflights.