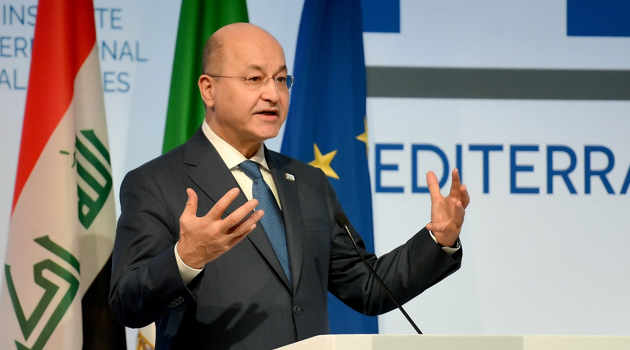 Iraqi President Barham Salih has told an international conference in Rome that Iraq will remove any impediments to Iraqi and foreign private sector companies, as well as international financial institutions, donor countries and sovereign wealth funds, to invest in major infrastructure projects in the country.

He added that these projects may include deep port facilities in Basra, a highway network, new railways, airports, industrial cities and dams, and irrigation projects in the Nineveh Plain, Garamian, Erbil, as well as land reclamation in the south.

The following is the full text of the speech delivered by His Excellency President Barham Salih at the Conference of the Mediterranean Dialogues on Thursday afternoon, November 22, 2018:

First of all, I’d like to thank the Italian Ministry of Foreign Affairs and ISPI for organizing this conference and the opportunity to address this distinguished audience. I also want to thank His Excellency President Sergio Mattarella and His Excellency Prime Minister Giuseppe Conte for their kind invitation to Italy.

Many may say there is nothing unique about the present day Middle East — we are living through yet another phase of conflict— as we have been plagued by conflict and powers struggles for much of our contemporary history.

However, the military defeat of DAESH and the formation of a new government in Baghdad may well represent a turning point not only for Iraq, but also potentially for the wider Middle East. Iraq has been the epicenter for change in Middle East- for millennia, Iraq has often been the catalyst, the precursor regional order— or disorder!

I dare say that there is now an opportunity to reorient Iraq’s trajectory and propel the country towards prosperity and stability. This will require embarking on fundamental internal reforms, both political and economic.

As such, Iraq is in need of an internal dialogue to address the underlying structural flaws at the crux of the post-2003 political order. Iraqis are indignant at years of conflict and the failure to deliver services. Restoring basic services like water and electricity, reconstruction of the devastated communities by the war with DAESH and repatriation of our IDPs to their homes is an urgent challenge. Corruption and abuse of public funds undermine the viability of the Iraqi state and sustains the cycle of conflict and terrorism. It is imperative to dry up the swamp of corruption.

The defeat of ISIS was undeniably a monumental challenge and impressive success for Iraqi armed forces— the Army, Police, Hashd Al Shabi mobilized by the fatwa of Ayatollah Sistani and Peshmerga forces fought side by side and have become battle hardened. In this context, we are grateful for the help rendered by our allies in the international coalition, led by the United States and which comprised many nations including our generous host Italy. The task ahead is to enhance our defense and intelligence capabilities, integrate our armed forces within the framework of our national defense institution and affirming accountability of all armed forces to the state.

There remain issues of contention between the Kurdistan Region and federal government— time to resolve these issues in a fundamental way through adhering to the constitution. There is renewed hope as the our new PM Dr Adil Abdul Mahdi and the Kurdistan leadership have pledged to move on to resolve these outstanding issues. The recent agreement to resume oil exports from Kirkuk to Ceyhan is a welcomed gesture in this context.

However, ending the crises that plague Iraq also require a reconstruction of the current political order to restore citizen trust in the government. A reformed political order must be based on the protecting constitution, the civil state that strengthens civic values, supports the role of women and their rights, and ensures a commitment to human rights.

A most important and consequential challenge for Iraq today is economic reform and regeneration. Iraq is endowed with immense natural resources, water and fertile land— and an indispensable geopolitical position that can become the hub for regional trade and economic integration. Yet decades of war, sanctions, conflicts, economic mismanagement and corruption have tuned Iraq into an extreme rentier state. This is unsustainable— we are today a 38 million population, and increasing at a rate of one million each year— youth unemployment is rampant— this is a profound security, social and development challenge.

The new government, led by Adil Abdul Mahdi, a pragmatic reformer and economist, is pursuing an ambitious economic restructuring agenda based on empowering the private sector and promoting investment. The unity of Iraq and its security is crucially dependent on strengthening infrastructure links within Iraq and with the neighborhood. This is imperative to bind the country together and to promote common interests with the neighbors and to ensure job opportunities for our youth.

Iraq will be eliminating impediments to Iraqi and foreign private sector companies, as well as international financial institutions, donor countries and sovereign wealth to invest in major infrastructure projects. These projects may include deep port facilities in Basra, a highway network, new railways, airports, industrial cities and dams, and irrigation projects in the Nineveh Plain, Garamian, Erbil, as well as land reclamation in the south. Similar experiences can be seen in Thailand, Vietnam and India, which attracted investment funding from sovereign wealth funds in Japan, China and the Gulf.

In addition to local economic growth, these projects could also contribute to regional economic prosperity. Iraq is an important strategic hub that joins the Arab world with Iran and Turkey and connects the economies of the Gulf and Europe. These could connect the countries of the region so that Iraq could become the heart of a new Silk Road to the Mediterranean.

But for Iraq to succeed and stabilize, it requires a regional order that can embrace and nurture its stability. Iraq has been the domain for regional power struggles— the rivalry over Iraq, and within Iraq, among regional and global actors have sustained and deepened Iraqi crisis. For the last forty years, Iraq has been moving from a war to a war, sanctions and terrorist onslaught and condemned to en ever deepening cycle of crises. This is got to end. It is time Iraq’s stability and prosperity is turned into a common intertest in the neighborhood. Iraq is an important country in the Arab world— This Arab anchor for Iraq is vital economically and politically, and we are emphatic about fully developing our relations with our Arab and Gulf neighbors. Our relations with Iran is also important, we share a border of 1400 km, and much social and cultural bonds — and it is in our national interest to promote good relations with Iran and alike with our northern neighbor, Turkey, which is undeniably an important economic geopolitical actor.

I just come back from a tour to our neighbors in Kuwait, UAE, Jordan, Iran and Saudi Arabia— our message was that Iraq is adamant to protect its independence and sovereignty— our priority is economic regeneration and jobs for our youth— and that we want Iraq’s stability, sovereignty and prosperity to be shared interests for the neighborhood. I made the point that Iraq’s prospects for success is real, but remains precarious, so it should NOT be burdened with further tensions and escalations in the neighborhood. The Middle East needs a regional order based on shared security interests in the face of violent extremists and also rooted in economic collaboration and integration. As in the past, sovereign Iraq with its geopolitical, cultural and economic relevance can be a catalyst for such an order.

I am sure many of you will consider this as too ambitious— perhaps mere wishful thinking. Europe did it after two devastating World Wars— many other regions of the world have moved away from decades of conflict. We must pursue this agenda for our region with vigor and determination— it is primarily our responsibility in the region— and our people deserve better. However, legions of unemployed youth, millions of IDPs in camps— poverty and conflict are the incubators for terrorism, extremism and yes immigrants fleeing our fertile an rich lands to come to the shores of Europe— this should also be shared global interest— certainly a European interest.

This conference theme is about youth and women empowerment. The agenda of reform in Iraq, and the vision for a durable regional order in the Middle East, is what will defeat violent extremism through providing education, meaningful job opportunities for our youth and prioritizing human development as a core aim for our governments and for the global powers.

Iran-Iraq Relations in light of US Sanctions
Putting an End to Violence against Women in Iraq
Tags: Barham Salih, featured, Infrastructure, reconstruction

2 Responses to Iraq to remove Impediments to Infrastructure Investment