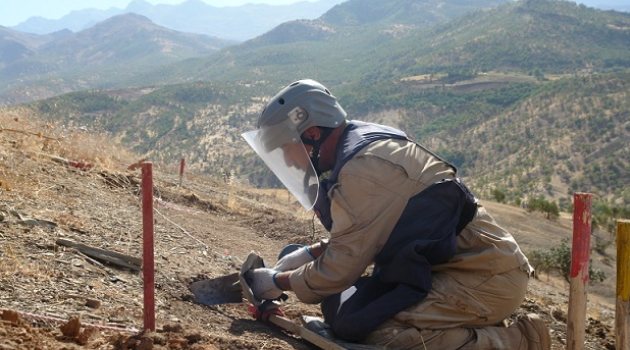 The Iraqi Kurdistan Mine Action Agency (IKMAA) has cleared 7,414,199 square meters in areas liberated from ISIS of explosive devices and difused 43,057 IEDs and UXO pieces, said Siraj Barzani, Head of IKMAA, in an interview with the Kurdistan Regional Government website.

From the 2014 ISIS onslaught until October 2017, three IKMAA units in Duhok, Erbil, and Germiyan, in cooperation with Peshmerga forces, started their plan to clear contaminated areas and raise public awareness of explosive devices.

Mr. Barzani said that poisonous chlorine gas bottles stockpiled by ISIS were also deactivated by an IKMMA team with the assistance and supervision of a special chemical weapons team from the Ministry of Peshmerga Affairs and Ministry of Interior.

According to Mr. Barzani:

According to IKMMA, in 1991, 776 square kilometers of the Kurdistan Region were contaminated with landmines and unexploded ordnance, UXO, laid by former Iraqi regime forces, which has since decreased to 270 square kilometers, a reduction of 65 percent.

According to Mr. Barzani:

“From 1991 until October 2018, there have been 13,233 victims of landmines and other explosive devices. Today, there are fewer victims due to clearance operations and increased public awareness.’’