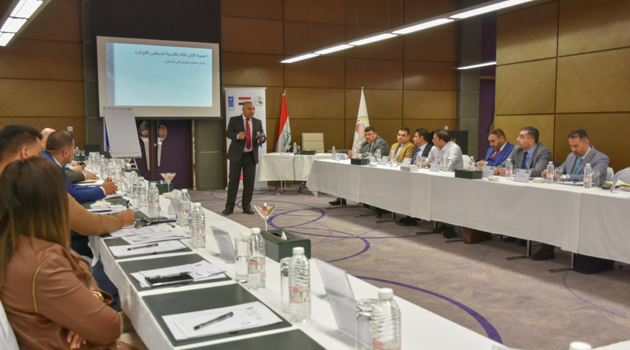 The United Nations Development Programme (UNDP) In cooperation with the Iraqi Council of Representatives (CoR) organized three-days induction sessions on the principles of Parliamentary work.

The sessions came as part of the continues support to the institutional reform and enhanced governance in Iraq. In line with the Sustainable Development Goals (SDGs). 35 newly elected Parliamentarians attended the three-day sessions where they went through a practical guidance about the parliamentary administration work, legislative and oversight role, constitutional and legal framework for the work of the Council of Representatives, human rights, Gender equality, SDGs and media relations.

In addition to presenting international experiences in parliamentary development.

As part of a four-phase induction programme to inform Members of Parliament (MPs) about their legislative, and oversight role and their constitutional responsibilities, this session followed the previous workshop held in last November for 50 parliament members, in cooperation with the office of the First Deputy Speaker of the Council of Representatives and the Parliamentary Directorate.

The First Deputy Speaker of the Council of Representatives, Mr. Hasan Alka’bi said:

“Our cooperation with UNDP is very important at this stage to enhance the capacities of the newly elected MPs, the CoR is very interested to conduct more similar sessions, especially with the current critical situation of Iraq. We have lots of laws and legislations but implementing them is our main issue. Therefore we count on the expertise that the UNDP is offering in terms of institutional reform and parliamentarians legislative and oversight role”.

“This training has been tailored made by UNDP with assistance from the parliament staff from the general secretary, it is an opportunity for the Iraqi MPs to meet and interact with the parliamentary staff and international experts and discuss their constitutional role”.

Gender session led by UNDP Gender advisor Ms. Sundus Abbas was an opportunity to open a discussion on the decision of merging the Women Parliamentary Committee with the Human Rights Committee, and how this will reflect a negative message to the international community. The First Deputy Speaker Mr. Alka’bi expressed that this decision requires further consultation with the relevant MPs.

The workshop concluded with positive feedback from the participant MPs. It was recommended to conduct additional intensive sessions to strengthen the MPs capacities and perform their functions more proactively.

Launched in late 2017, The Inclusive Governance Project focuses on democratic governance that plays a key-role in the development of Iraq’s inclusive politics. It aims to foster Inclusive Politics through strengthening the effectiveness and accountability of Iraqi’s parliamentary institutions in promoting participation in political processes, state-building and the Sustainable Development Goals-SDGs.

One Response to Enhancing the Capacities of Newly-Elected Parliamentarians