By Editor on 5th March 2019 in Ahmed Tabaqchali, Investment

The Iraqi market, as measured by the Rabee Securities RSISUSD Index, declined by -9.7% in February, taking the year to date decline to -12.5%.

February’s decline takes the index below the multi-year lows made in May 2016, for a decline of ­-70% from the multi-year highs of January 2014 to February 2019, versus the -68% decline from the same highs to May 2016. However, the severity of the decline and the immediate triggers are the only things that the two months have in common, while all other indicators, both fundamental and technical, are diametrically opposed.

The immediate trigger for the decline in the last two months was a foreign portfolio liquidation, the same trigger behind that of the period leading into May 2016. However, the similarity ends there, as the current foreign liquidation is that of a relatively small single portfolio vs. the massive multi-month liquidation witnessed then as the chart below demonstrates. 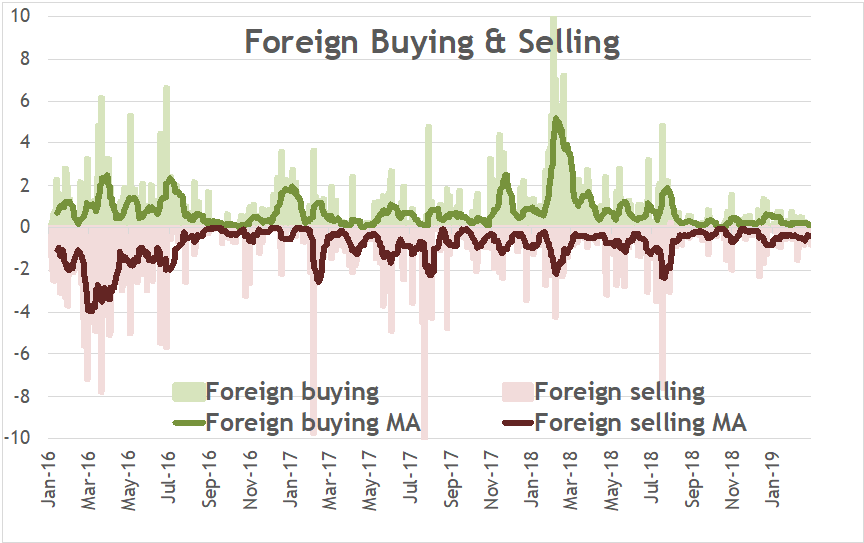 The above chart is an index of the absolute level of foreign selling & buying with their respective moving averages, clearly showing the contrast between the two periods (both highlighted in light orange). The main reason for the similarity, in effect of the selling on the index, is due to the extremely low liquidity in the current market- a low level that has been discussed in “Volumes and Reversion to the Mean”.

The average daily turnover per month since late 2014 (chart below) shows the association of low turnover with the index levels. Moderate selling in such an environment of extremely low liquidity exerts a strong downward pressure on prices, which coupled with low prices turns a few price increments into much larger percentage moves. A case in point is Bank of Baghdad (BBOB) which started the month at IQD 0.280 per share. Due to selling it declined to IQD 0.250 by month’s end. This is equal to three price increments (the minimum price increment is IQD 0.010), yet it is a -10.7% decline from 0.280 to 0.250, which in turn accounted for a -1.2% downward move in the index. Another issue of low liquidity is how it affects higher priced stocks, resulting in them trading in much larger price increments, with the end result producing the same percentage change effects as for the lower priced stocks. 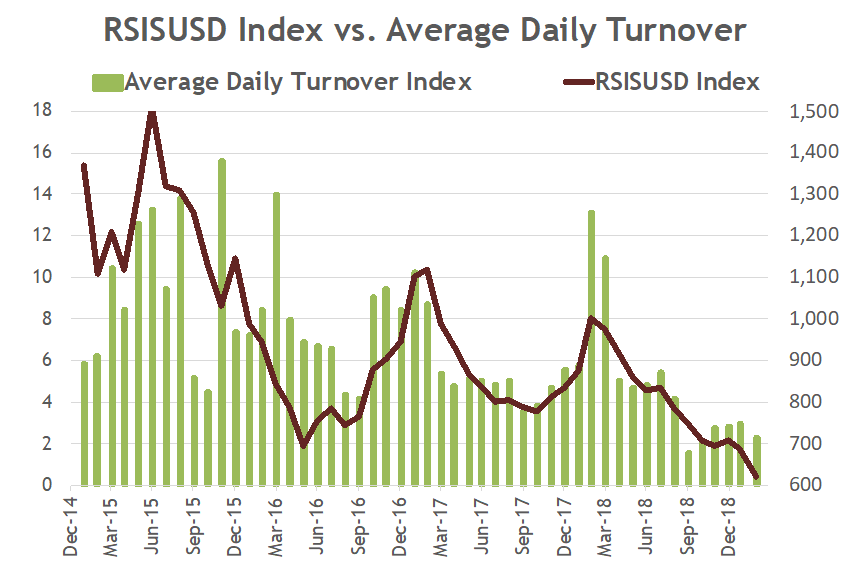 The macro picture between 2016 and now couldn’t be more different. In 2016 Iraq’s economy was being crushed by the double whammy of collapsing government revenues, due to falling oil prices, and the sharply increasing cost of the ISIS war- a war that many international commentators believed marked the end of the Iraqi state. However, the end of the ISIS war cemented Iraq’s integrity and its position as a key player in the Middle East. This is evidenced by the high number of heads of state and high-level official visits to Iraq over the last few months as relationships which were forged during the ISIS-conflict are being developed into future economic relationships.

On the other hand, the economy in 2019 is gradually benefitting from the expansionary effects of the reversal of the forces that crushed it. In particular, the healing effects of higher oil revenues over the last two years is beginning to filter down into the broader economy with the first signs being seen in the recent recovery in broad money, or M2 which acts as a proxy for economic activity, as can be seen in the chart below. 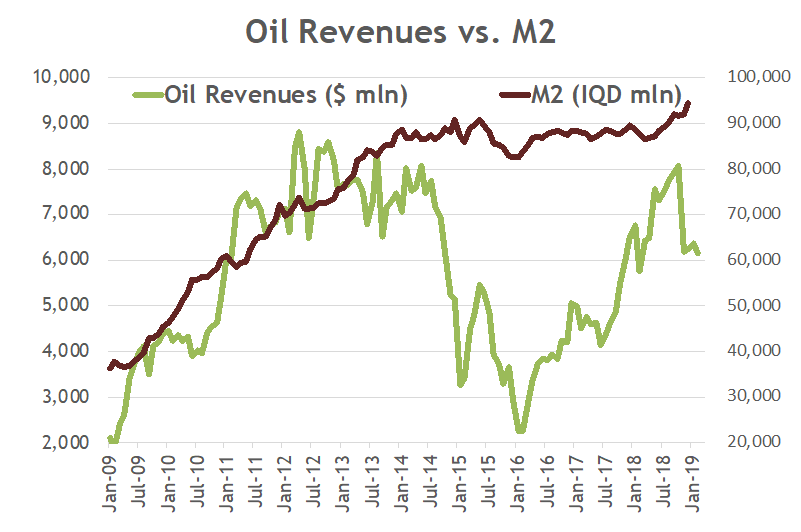 The period leading to the May 2016 low witnessed multi-month declines in oil revenues that had a massive negative effect on economic activity as first seen in the stagnation of M2, followed by a decline as manifested in the onset of a severe economic contraction. It was natural then that these effects would negatively impact corporate earnings and ultimately lead to a marked decline.

A mirror image reversal is taking place in 2019 as multi-month increases in oil revenues have revived M2 which points to an economic recovery. The early signs of this is evidenced in the growth of customer deposits (consumers, businesses and government) with banks, which can be seen in the chart below through the growth of the IQD Current Account (C/A) component of banks’ reserves with the Central Bank of Iraq (CBI) – the recovery of which accelerated in May 2018, with the latest data as of early February indicating a continuation of this trend. 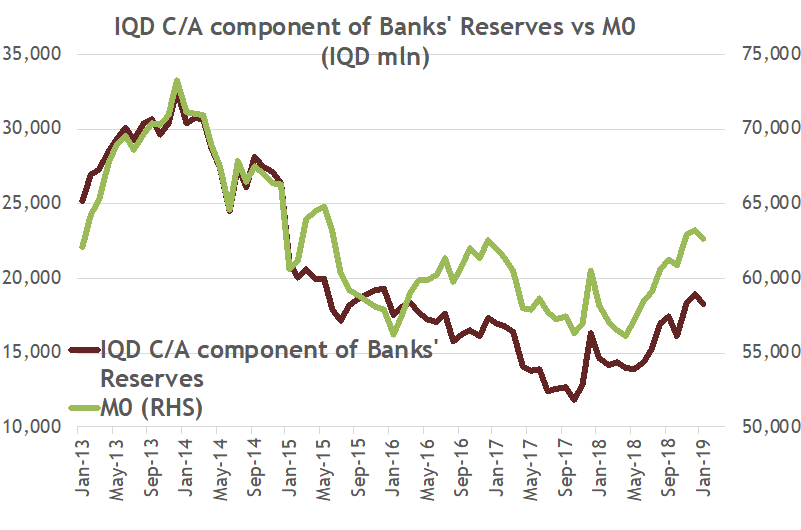 (Note: M0 as of Jan, IQD C/A component of bank’s reserves as of Jan)

Other signs of economic recovery can be seen from the recent earnings reports of consumer spending related companies such as Pepsi bottler Baghdad Soft Drinks (IBSD) and mobile operator AsiaCell (TASC). Of the two, the data from TASC is promising, as the company is especially leveraged to the economic recovery given the severe hits its profitability took due to the ISIS conflict which were discussed fully in “Telecoms Dial up Recovery”

The drag on the economy thus far in 2018 and 2019 has been due to the political paralysis before, during, and after the May 2018 parliamentary elections. This led to a torpidity in government spending, but a silver lining of the government inaction has been the steady growth in the government budget surplus that is estimated to be about USD 24.5 bln in the two years ending in 2018. This paralysis in government spending has finally come to an end with parliament’s approval of the 2019 budget in mid-January.

The 2019 budget’s non-oil investment programme is about USD 12.5 bln, which would be equivalent to about a 7.5% stimulus to the estimated non-oil GDP for 2019. While it is highly unlikely that this would be immediately spent, yet the spending should start with a trickle but grow as investment spending gets underway.

Just as the negative fundamental forces in 2016 were the reason for the market’s decline, their reversal and the early signs of economic recovery should lead to an economic growth which must find its way into corporate earnings’ recovery- which in turn should lead to a rising market. Logically, this ought to mean an end to the market’s divergence from its past close relationship with oil revenues (a proxy for the forces driving the economy) which is currently at the widest it has been for the last few years (see below). 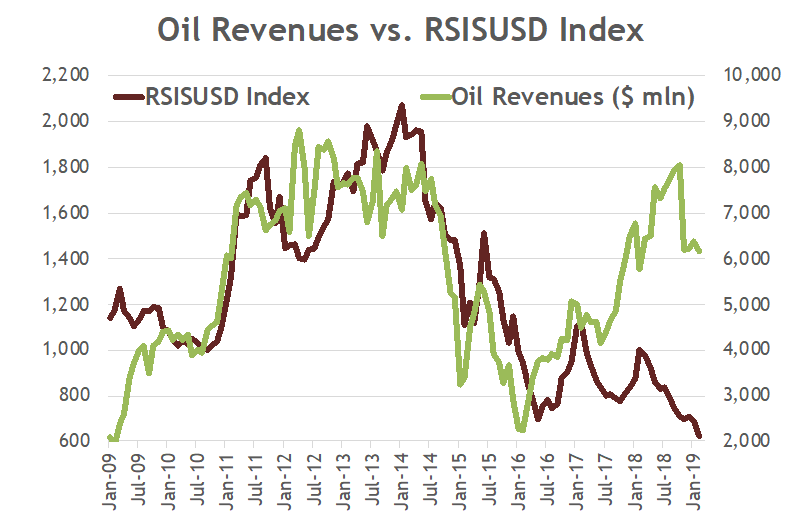 (Note: Oil revenues as of Feb)

In conclusion, the fundamentals seen in the prior charts surely argue that it’s only a matter a time before the liquidity in the broader economy finds its way into the Iraqi equity market, the reigning ugly duckling of frontier markets, to turn it into a swan or at least into a duck that flies.