By Editor on 7th November 2018 in Ahmed Tabaqchali, Investment

The end of the month brought with it the end of the multi-month paralysis in government as the designated prime minister was confirmed by parliament through the approval of his proposed cabinet on October 25th. Although, parliament has not approved all of his ministerial choices- a function of the fragmented politics of the new parliament and a possible marker of risk for the government’s future stability.

Nevertheless, the new government is in a position to implement its policies, as articulated by the prime minister in presenting his government, which are focused on the provision of security, services, and investment in much needed infrastructure. The implementation of these policies is made possible by the accumulated budget surplus for 2018, which was about USD 14.5bn at the end of August- and on course for a two-year accumulated surplus of USD 24.5bn by the end of 2018.

Coinciding with this has been the end of the 40-day Arbaeen pilgrimage that brought the country to a standstill as millions of pilgrims took part in “the largest annual gathering of people anywhere on earth.”, including almost two million Iranian pilgrims.

The end of the Arbaeen, summer, and the government formation should be followed by the end of the period of, probably, the lowest daily trading volumes on the Iraq Stock Exchange (ISX) since it first witnessed an expansion in volumes in 2010. Average daily turnover in October, while higher in percentage terms than the dismal levels of September, was among the lowest for some time (chart below). In tandem the market, as measured by the RSISUSD Index, declined ending down -5.3% for the month, continuing to test the major bottom of May 2016. 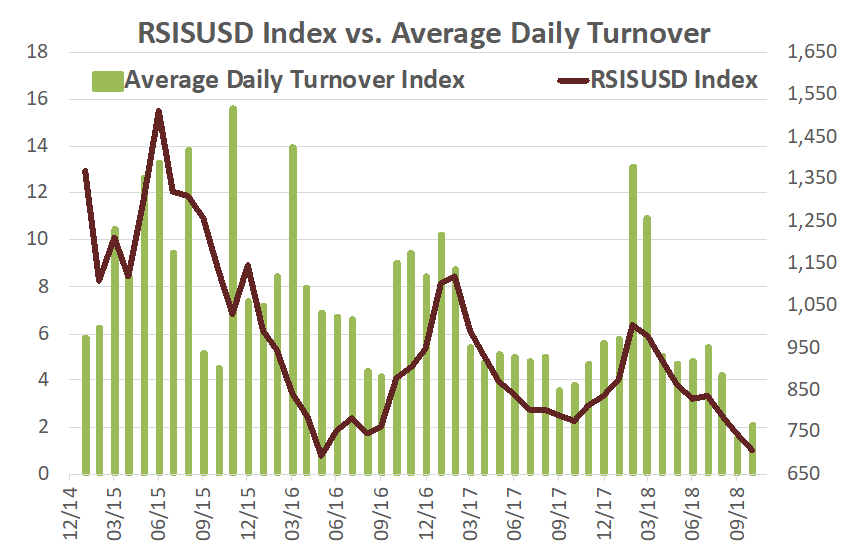 While, the anomaly of these low levels can be seen in the chart above, they come into sharp focus when viewed statistically in the form of a frequency distribution. The two charts below drill down into actual daily turnover for two periods: (1) January 2013-April 2014-representing the bull-market phase of rising prices and high turnover; (2) January 2016-October 2018- representing the bear -market phase of declining prices and low turnover. The frequency refers to the number of trading days corresponding to ranges for the daily turnover index on the LHS of the above chart. The contrast between the two periods is extreme from both the level of the average daily turnover, the concentration of daily turnover around the average (standard deviation) and the full range of turnover. 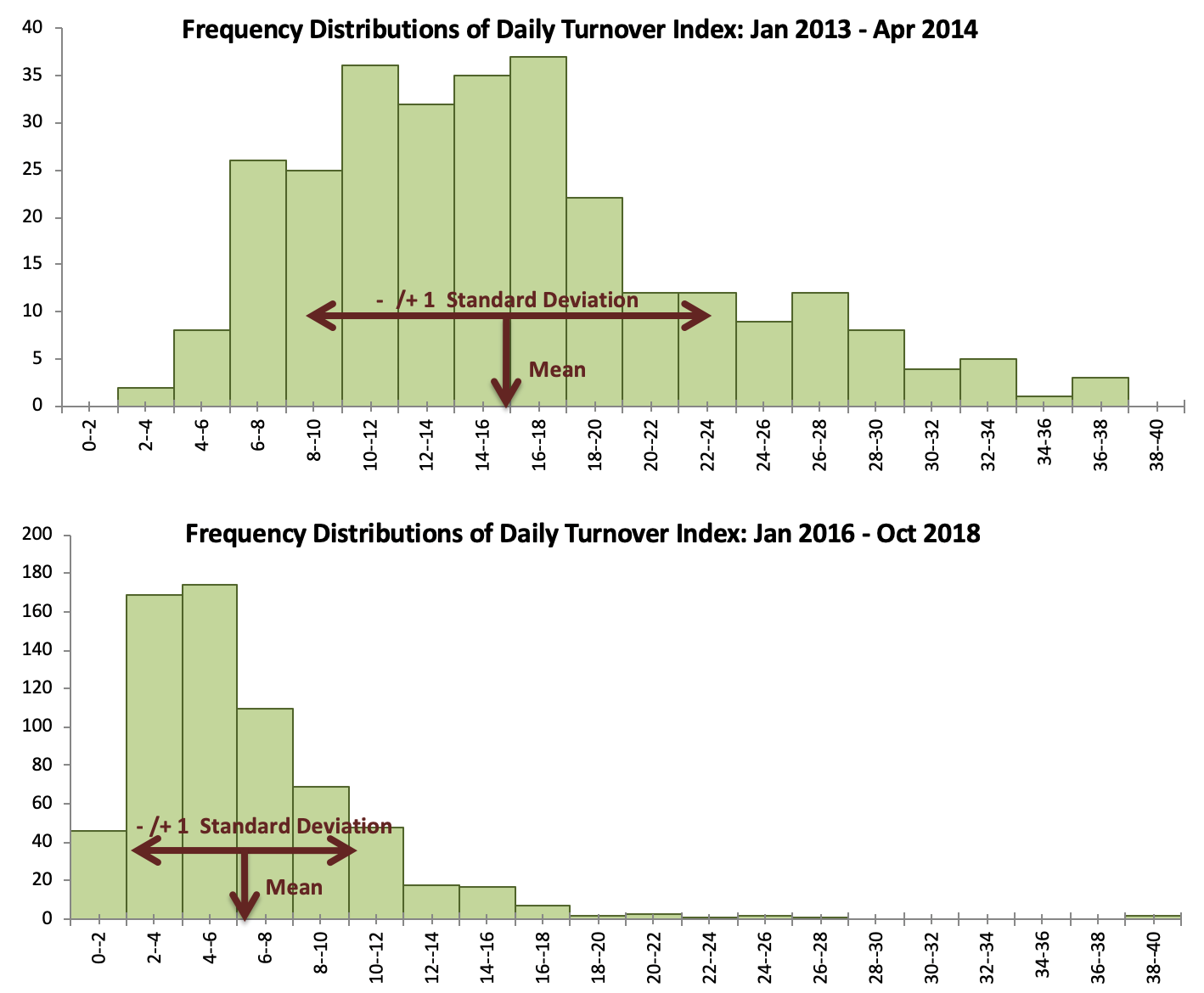 Almost 63% of the lowest turnover days, for January 2016-October 2018, were in the last two months, while the other 37% was spread out as odd days throughout the whole period. As such, it seems that with the end of the political paralysis and summer slowdown that turnover should revert to the mean. While neither this nor the direction of the market are assured, a clue can be obtained from the initial recovery in M2 (see chart below) which has ticked up over the last few months, following months of sharply increasing oil revenues. While the September M2 figure is an estimate, it is based on actual M0 figures for the month and the recent M2/M0 multiplier figures. As such, this could mean that liquidity has finally begun to filter down into the economy – which should accelerate as the new government begins to act on its investment programme. 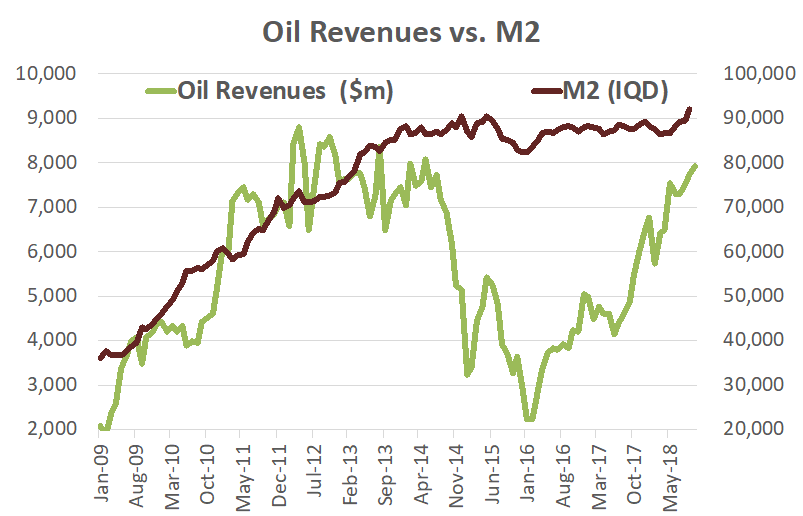 The strong improvement in the finances of the country following years of conflict lie behind the reason for the continued expectations, expressed here over the last few months, that the market would be correcting and then bottoming. However, these expectations continued to be tested as the market sustained its dismal performance, and its divergence from its past close relationship with oil revenues is currently at the widest it has been for the last few years (see below). 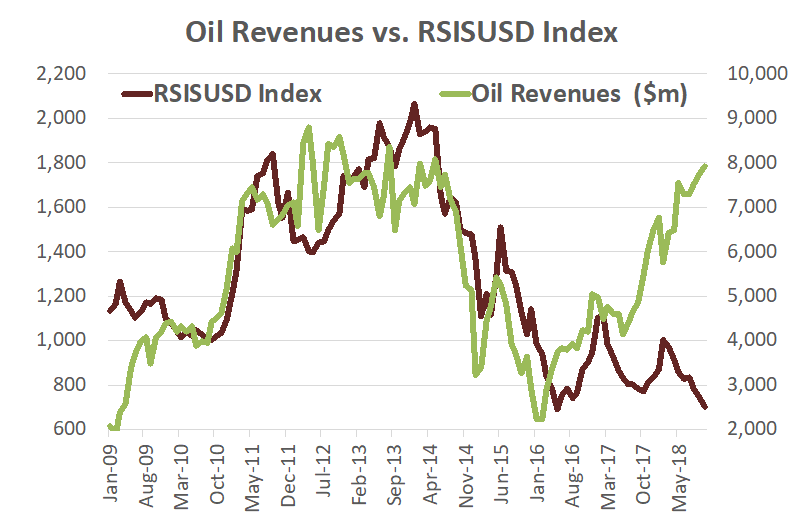 The end of the political paralysis, the sharply improving government finances and tentative signs of liquidity reaching the wider economy could act as the catalyst to change the direction of the market to the upside. If similar experiences in other frontier markets were to be repeated here (a big if) then the anomaly of the current low trading volumes coupled with the market’s sharp divergence from its historic association with oil revenues would suggest that the next move could be a sharp reversal of the recent trend.