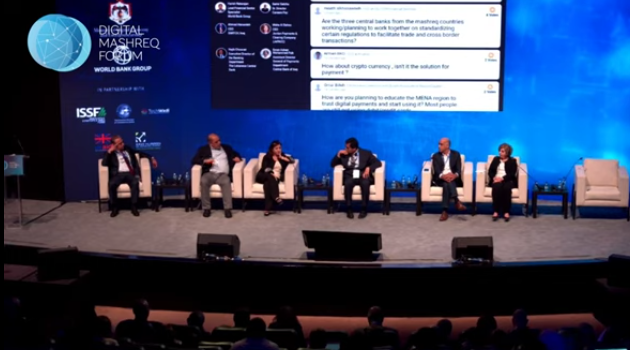 Iraq, Jordan and Lebanon have committed to digitally transform their countries, discussing their roadmaps to support the Mashreq region's integration into the rapidly evolving global digital economy.

The commitments came on the first day of the landmark, high-level forum on Digital Economy and Entrepreneurship Development in Mashreq, which was  hosted by the Government of Jordan and organized jointly with the World Bank Group.

The three governments had identified the challenges and solutions that would allow Mashreq countries to realize more gains to their economies and societies. Digitalization is shaping the present and future of economic activities as it brings about higher productivity, efficiencies and quicker inclusion of lagging economic and social groups, such as women and youth.

The Mobile Gender Report for 2018 lists a gender gap in mobile ownership among women in the region which can reach up to 20%. while this gap is only 2% in countries like Egypt or Turkey. Bringing this gap to less than 4% everywhere in the Mashreq would bring income opportunities for women in the region. Broadband access is estimated to increase employment among married women by as much as 4% in high income economies.

Broadly speaking, Iraq, Jordan and Lebanon face similar obstacles to their quest to transform Mashreq into a regional hub for IT and Business Process Outsourcing.  Policymakers, international and regional businesses, startups and investors all convened at the King Hussein Business Park to enrich the discussion with their expertise and experience on how to push this agenda forward.

The digital roadmaps were presented by the three ministers holding the Information Technology portfolio in their respective countries. World Bank Group  committed to supporting these countries achieve their goals with specific focus on increasing broadband access, establishing cashless payment systems and bridging the gender gap in mobile usage.

The Government of Iraq (GOI) is committed to further advancing the digital economy and aims to ensure affordable access to high speed internet, by doubling access to broadband to 54% in 2021 and 90% by 2030, achieving 100% broadband network coverage, establishing a conducive regulatory and policy framework for digital payments, developing interoperable digital payments infrastructure, and striving towards 100% financial access. The GOI is also committed to delivering digital government services and ensuring highest standards of cybersecurity and data privacy to boost consumer trust. The GOI is also keen to ensure that education and training programs meet current and future job market skills needs.

The Government of Jordan (GOJ) is committed to advancing the digital economy as strategic growth sector for the Kingdom. On digital infrastructure, the GOJ commits to further developing access to internet broadband to reach 100% penetration rate by 2021. As part of that, the GOJ is opening the National Broadband Network (7,000 kilometers of fiber) for Public Private Partnership, allowing affordable fiber broadband to 1.3 million households around Jordan. On digital payments, the GOJ commits to increasing country-level cashless payments from 33 to 50% by 2020 and to digitizing 80% of government to citizens payments by 2021.  On developing digital skills, the GOJ will launch a national skills development initiative to train 35,000 people on the 21st century skills and mainstreaming digital skills in public schools to train 300 thousands by 2022. To enable a friendly business environment for entrepreneurs, the GOJ is committed to launching a regulatory reform process in 2019, following a participatory approach with ecosystem representatives. To complete automation of Government services, the GOJ commits to automate key services by 2021. Building on the recent transformations of the Ministry of ICT to Ministry of Digital Economy and Entrepreneurship, the GOJ will launch its digital transformation action plan in partnership with the ecosystem by end of 2019.

The Government of Lebanon (GOL) is committed to building a Digital Nation and to transform Lebanon into a regional technology and innovation hub. The GOL  is in the process of finalizing its digital transformation plan and aims to double the knowledge economy's contribution to GDP and double the employment in this sector by 2025. To achieve this, the GOL plans to: (i) reach 100% broadband penetration rate by end of 2021; (ii) develop and execute the digital transformation of the public sector and offer citizens a fully digitized journey across all government services, with 500,000 users signed up to the government digital platform by end of 2021; (iii) provide a supportive regulatory framework to help grow the Fintech industry and facilitate digital payments, launch a new national digital currency by the end of 2020, and launch an Electronic Trading Platform (ETP) to improve financing for private sector activities in 2020; (iv) leverage its pool of skilled and entrepreneurial talent in Lebanon and abroad to build a digital economy focused on innovation and private initiative, increase the number of start-ups fivefold and double yearly venture capital funding by 2025; and (v) address the existing skills gap by preparing the youth for the global, digital jobs of the future through launching a national training academy by 2021.

The World Bank commits to support Iraq, Lebanon and Jordan in achieving their visions and plans for digital transformation by providing the necessary resources and instruments. The World Bank will work closely with the Governments, private sector, academia and civil society to maximize the impact of digitization and reap the digital dividends for their societies. This support will include: (i) pursuing plans to ensure affordable access to high-speed internet and facilitate investment in broadband; (ii) delivering digital government services and improving access to data, while ensuring the highest standards of cybersecurity and data privacy; (iii) developing a modern digital payment infrastructure; (iv) scaling up digital entrepreneurship; and (v) ensuring education and training programs meet current and future skills needs.

More details, including a video of the procedings, can be found here.

The second high-level Digital Mashreq Forum will convene in Beirut in June 2020.