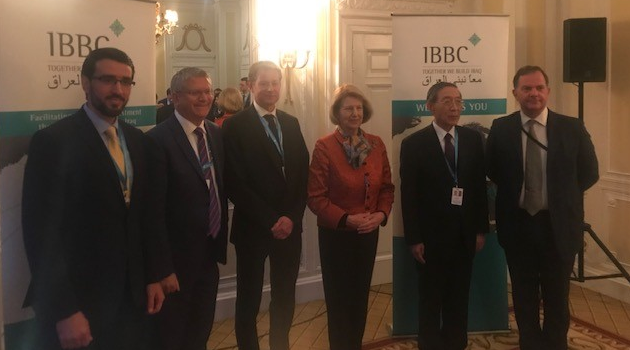 By Editor on 3rd October 2019 in Iraq Industry & Trade News

Led by Baroness Nicholson of Winterbourne , President of IBBC and Trade Envoy to Iraq, a number of members including BP and Tratos were welcomed to the well attended event.

Dino Bossi director at G4S risk spoke movingly of the sacrifice he and his soldiers made in Iraq 2004 to ensure stability and his delight at seeing Iraq recover and rebuild to the present day.

Alan Woods from Rolls Royce also spoke about the Royce room we held the reception in as the room Rolls Royce was conceived in 1904.

Baroness Nicholson spoke of the British company members who represent the highest of international standards in business, product, training and employment that are deployed in Iraq.

She also welcomed Andrew Rosindell MP chair of the Appg for Iraq who spoke of the amazing development of IBBC in the last 10 years. He was joined by the ambassador for Taiwan.

Liam Fox MP and former DIT Secretary of State also joined the event along with business associates and Iraqi members of the Conservative party.