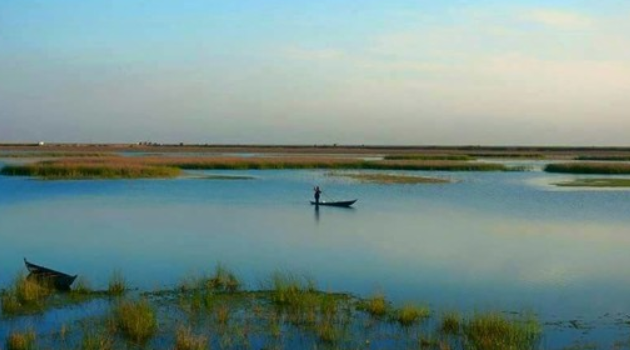 The birds, flowers and buffalo are all returning, thanks to heavy rains last winter. Now, locals say, federal funds are needed to improve infrastructure and state services, and to guard against potential flooding.

“I had lost all hope,” says Sawadi Najim, a 54-year-old local of the Jabayesh marshes in southern Iraq. “I thought I was going to see this beautiful place become a desert.”

The drought started in 2012 in Iraq’s famed southern marshes and reached its dry peak around 2015. People lost their businesses and their homes, says Najim, who was forced to leave the area he was born and raised in two years ago. His ten buffaloes went blind, then died of hunger and thirst. “I used to depend on them to make my living,” explains Najim, who moved to the city. “And I also had to stop fishing when the water levels dropped.”

Jabayesh lies about 95 kilometres east of Nasiriya, the capital of Dhi Qar province and covers an area of about 600 square kilometres. The marshes were drained by former Iraqi leader, Saddam Hussein, in the 1990s in an attempt to starve revolutionary Iraqis out of the area and even though waterways were unblocked after 2003, the marshes – home to unique birds, fish and plants as well as farmers and fishermen – have never been the same since. More recently it has been nature that has been an enemy of the marshes.

But, critics suggest, man-made mismanagement of water resources has also played a part. “There’s been a lack of understanding about the seriousness of water management,” suggests Mohsen al-Shammari, a former federal minister of water. “Other useless issues” were the main obstacle to the work of the water ministry when he was in charge, al-Shammari suggests. Additionally there was no unified position on how to deal with Turkey and Iran and their damming practices because of internal political divisions, he notes. The fact that the extremist group known as the Islamic State had control of a major dam in Syria, and caused the level of the Euphrates river to fall, was certainly not helpful either.

But then came 2018 and the heavy winter rains that replenished the marshes. “Water levels are at about 80 percent,” Jassim al-Asadi, a senior manager with Nature Iraq, an local conservation organisation, reports. “In the past, they were at 20 percent, at best.”

The streams and rivers that feed the marshes have been almost full since last winter and the Haditha dam has also been able to release water into them, al-Asadi says. In fact, while locals no longer need be concerned about drought, they should be worried about potential flooding this winter if there is similar or more rainfall, he cautioned.

The Ministry of Water Resources has already been digging trenches that would drain any excess floodwater from dams into the marshes, al-Asadi adds.

For now, the marshes are once again teeming with life. Buffalo herders like Najim have been able to return home, as have fishermen and the craftspeople who use the marsh reeds to produce goods for sale. There has also been an increase in visitors coming to the marshes and boat and restaurant operators are also thriving.

“Thanks to low salinity levels in the water, we have more plant and animal diversity too,” al-Asadi says. Fish species that were thought to have died out have returned, birds are migrating from Europe for the first time in years and water lilies are also growing in greater numbers than ever before.

What the marshes need now is better management, locals say. Since 2016, the marshes have been on UNESCO’s World Heritage list but because of the security crisis caused by the extremist Islamic State group, the federal government had no time to concern itself with tourist facilities or the provision of state services in this area.

However Iraq’s Minister of Culture and Tourism, Abdulamir Hamdani, says that this year around IQD15 billion (around US$12 million) has been allocated in the federal budget to work on infrastructure projects in and around the marshes.

That includes a 37.5 hectare centre for tourist accommodation, which will include a museum focused on the nature and culture of the marshes. After construction is finished the project will also be offered up to investors. “We need to go into partnership with the private sector, the same way other countries do,” Hamdani told NIQASH.

Before any of that happens though, local man Sawadi Najim is just happy to be home. “I feel healthy and happy, “ he says. “I have rebuilt my house [his traditional-style house is made out of reeds and floats on the water] and I look out and see birds and buffaloes bathing in the water. The fishermen have started to return,” he noted, satisfied, ”and soon the sons of my tribe will be back too.”

One Response to Iraq’s Famous Marshes Come Back To Life