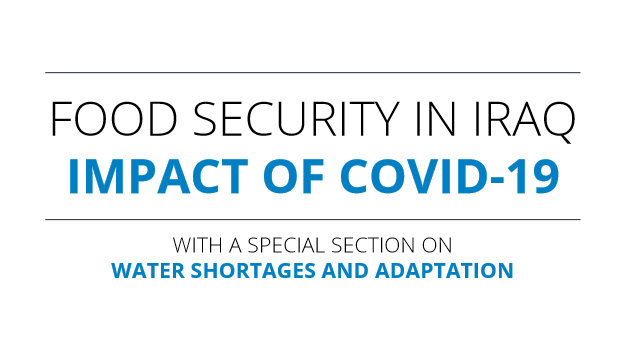 By Editor on 22nd October 2021 in Agriculture

Food Security in Iraq: Impact of COVID-19 with a special section on water shortages and adaptation (November 2020 - May 2021)

Over the six-month period analyzed in this report, Iraq experienced significant turmoil. In addition to the effects of the pandemic, with cases overall on the rise in Iraq - now in its third wave of infections - the devaluation of the Iraqi dinar in December 2020, and lower than usual seasonal rainfall, have all impacted upon the food security of households. The rainfall and water availability this year are the second lowest on record in 40 years.

Although oil prices have recovered compared to last year, the situation remains unstable. Demand and supply from major markets across the globe are affected, as countries battle deadly second and third pandemic waves. The challenge remains reconciling the government's considerable deficit and delivering the promises in its White Paper, while providing sufficient support to families and farmers in need, to preserve long-term food security and ensure no one is left behind in this triple threat phase: pandemic, prices and poor rainfall. Substantial social protection reform is still needed.

Water shortages have caused below normal vegetation development, and are affecting crop yields. According to initial estimates from FAO, by the end of the season, wheat production will be 70% lower and barley production negligible in volume. As well as farmers confronting challenges to accessing markets due to intermittent movement restrictions, higher fodder and input prices, the low rainfall is also having a knockon effect on vulnerable households.

Although markets are functional, prices are higher for consumers. In Ninewa and Salah al- Din governorates, which are worst-affected by lack of rainfall, the levels of insufficient food consumption and use of negative coping strategies are about double the national average. The government and humanitarian-development community needs to respond fast to ensure that the impact on families in need can be cushioned.