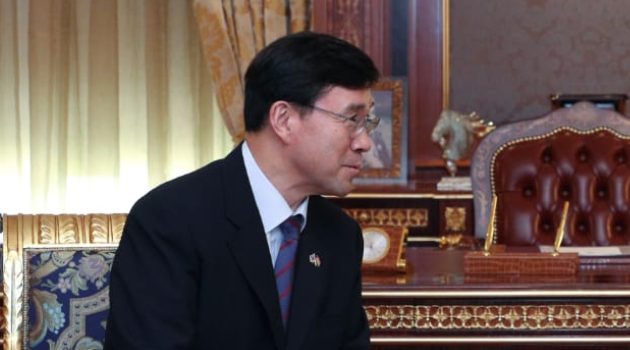 The Republic of Korea has contributed an additional US$ 3 million to UNDP's flagship programme the Funding Facility for Stabilization (FFS), which has been implementing critical  initiatives to stabilize areas liberated from the Islamic State of Iraq and the Levant (ISIL).

This is Korea's seventh contribution to the FFS since 2015, bringing its total contribution to US$27 million. With this additional funding, UNDP will be able to support more essential services such as housing, and the rehabilitation of critical infrastructure in the sectors of electricity, water and education ensuring the delivery of basic services to return communities.

"The impact of our collective stabilization efforts with generous support from the FFS from key partners such as the Republic of Korea are clearly visible across Iraq. Schools are reopening, clean water is reaching homes, roads are connecting people, and homes are rehabilitated," says UNDP Resident Representative Zena Ali Ahmad.

"However, critical stabilization needs remain as 1 million people are still internally displaced, including the hardest-to-return populations. The Republic of Korea's contribution  comes at a critical period for Iraq, as the international community looks to safeguard the hard-won stabilization gains and prevent ISIL's resurgence," she adds.

"I am very pleased that the Republic of Korea has provided contributions to FFS for seven consecutive years since its launch in 2015. I hope this year's contribution can help facilitate the implementation of UNDP's stabilization programme to provide returnees and local communities with housing and public infrastructure rehabilitation and livelihood opportunities," says Jang Kyung-Wook (pictured), Ambassador of the Republic of Korea to Iraq.

"We appreciate the hard work of UNDP and its partners to rebuild the lives of internally displaced persons and returnees in areas liberated from ISIL, and we hope to further strengthen our long-standing partnership with UNDP and make joint efforts toward achieving stabilization in Iraq," adds Jang Khyung-Wook.

At the request of the Government of Iraq, UNDP established the FFS in June 2015 to facilitate the return of displaced Iraqis, lay the groundwork for reconstruction and recovery, and safeguard against the resurgence of violence and extremism. The mandate was extended to 2023 due to the scale of urgent remaining stabilization needs and the request from partners to continue our interventions.

In 2021, the FFS is placing greater emphasis on utilizing an integrated approach that includes promoting sustainable livelihood and employment opportunities by rehabilitating supportive infrastructure for productive sectors, such as agriculture and small industries.