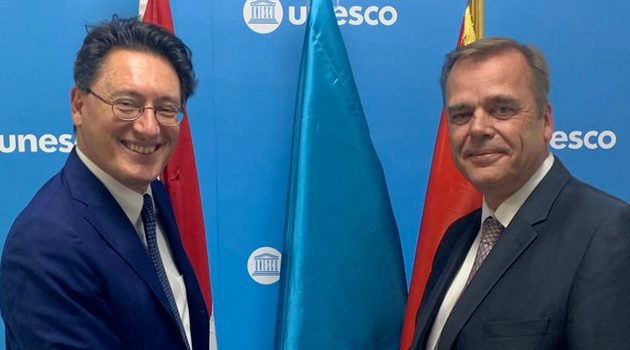 By Editor on 5th December 2021 in Iraqi Communications News, Security

Netherlands supports UNESCO Iraq to enhance the safety of journalists

The Netherlands Ambassador Michel Rentenaar and the director of UNESCO Iraq Office, Paolo Fontani, have signed the project agreement of the phase two of "Breaking the Silence: Enhance Accountability and Prosecution for Safety of Journalists and Fighting Impunity". The funding will help among others to establish the National Safety Mechanism for journalists.

The Netherlands support aims to improve the safety of journalists and their access to justice. The project will  build capacity and trust among journalists, civil society, government officials, security forces and the judicial system in the country.

The project will assist the Iraqi National Committee of Safety of Journalists and Issues of Impunity in training and assisting judges, police officers and prosecutors in dealing professionally with criminal cases of crimes committed against journalists, as well as producing integrated annual reports containing investigative and judicial information,

The new contribution will allow UNESCO to better support journalists across the country, through the National Safety Mechanism, and improve legal assistance for journalists and their families in need. The project will provide special support to female journalists.

Since 2016, the Netherlands has been a generous partner of UNESCO. This partnership grew to include support for the protection of journalists, the establishment of a Special Investigation Unit on crimes against journalists, and assistance to female journalists.

The UNESCO Iraq Office in Baghdad has been spearheading the implementation of the UN Plan of Action on the Safety of Journalists and the Issue of Impunity, in close cooperation with the Iraqi authorities, media representatives, as well as national and international specialized NGOs.

UNESCO has a global mandate to monitor and report on the safety of journalists and the issue of impunity.