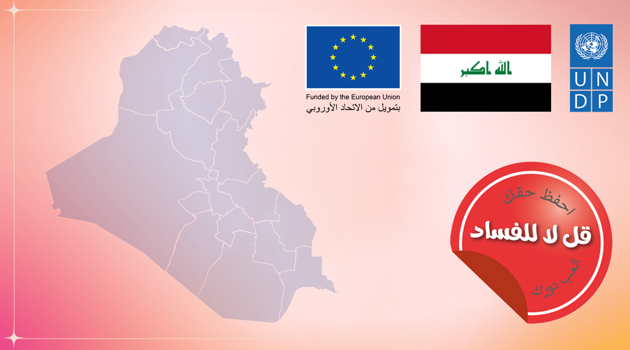 The fight against corruption requires collective action with the full participation of public authorities, the private sector, civil society, the media, and all citizens.

It will be essential all actors coordinate and synergize their efforts to enhance effectiveness and achieve significant results for the country.

International Anti-Corruption Day is observed annually on 9 December since the General Assembly adopted the United Nations Convention against Corruption (UNCAC) in 2003. Attitudes on corruption are changing, as people worldwide stand publicly against corruption as never before.

The theme of the International Anti-Corruption Day 2021 is "Your right, your role: say no to corruption" to raise awareness about the effects of corruption in times of crisis and stress that recovery can only be obtained with integrity and accountability.

This year, the European Union Delegation to Iraq, the United Nations Development Programme (UNDP), the Iraqi federal and Kurdistan regional institutions united their efforts in the joint initiative entitled "Fostering justice to curb corruption and promote arbitration in Iraq" which was officially launched in May 2021.

This project aims to bolster transparency and public accountability, supports Iraq to deliver on its national and international commitments concerning the fight against corruption, enhance the Iraqi legislative and strategic core for combatting corruption, support the justice sector to better process corruption offences, and foster and empower Iraqi civil society to take a more active role.

The Ambassador of the European Union to Iraq, H.E. Ville Varjola, affirms:

"Accountable government lies at the heart of the European Union and our values. Today, on the International Anti-Corruption Day, we stand united with the Iraqi people in its demand for transparency and good governance.

"Through this EU-funded initiative, we are working closely with the Iraqi government to respond to this call for change. To ensure the success of this project, I count on the strong ownership and engagement of the Iraqi state institutions and civil society alike."

"Anti-corruption efforts, alongside the promotion of more sustainable, inclusive forms of economic growth, are overwhelming public demands: by heeding these calls, Iraqi political leaders can help build lasting solutions for unrest and conflict."

"We are encouraged that federal and KRI authorities have initiated measures to improve the public transparency of state institutions by opening discussion on federal and regional access to information legislations. The right to know is crucial in enabling citizens to actively take part in the fight against corruption."