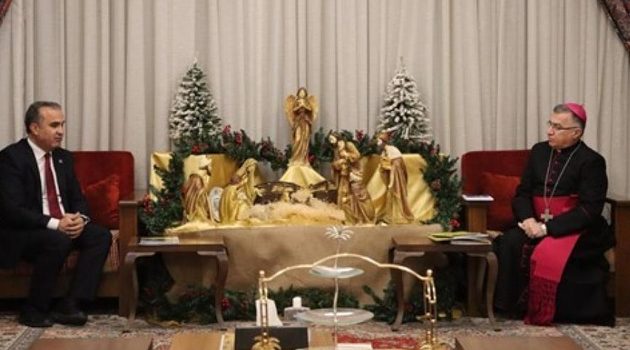 By Editor on 11th December 2021 in Agriculture

A FAO Iraq delegation visited the Chaldean Catholic Cleric and current Archbishop of Erbil, His Eminence Bashar Matti Warda, headed by Dr. Salah El Hajj Hassan, FAO Representative in Iraq, together with a number of female farmers and milk producers from Bartella and Hamdaniya districts, as well as agricultural extension cadres from the Nineveh Agriculture Directorate.

With financial support from the European Union, FAO is implementing a agricultural livelihoods project for returnees and rural and peri-urban communities in Nineveh Governorate. One of the very successful components is the development of the livestock and milk production chain of the project, implemented in close cooperation with the Ministry of Agriculture.

The meeting included a mini-exhibition of dairy products produced at the headquarters of the Archdiocese in Ainkawa, Erbil.

During his conversation with the Archbishop, Dr Salah explained the importance of FAO's interventions: "There is no doubt that the interventions carried out within the Project, has resonated widely with the public, from local officials, farmers and livestock breeders in Nineveh and throughout Iraq. The project has supported more than 4,000 families through introduction of new technologies, equipment, other inputs (e.g. seeds, fertilizer, sprinkler irrigation), and training. Also, 35 milk collection and processing centers were rehabilitated that support a total of 1,500 rural women.

Clear evidence has emerged that recently displaced farmers have returned to their area of origin and has given them a reason to stay and farm. The Archbishop thanked FAO and the EU for their support in providing so many families with a secure livelihood. "This is a good example of a project that I - and others - have been asking for since the liberation of Nineveh. Support to families reestablishing themselves is essential to help them return."

He said that about 2,600 Christian families have not yet returned and more needs to be done from the government side to support economic growth. He offered to help by promoting local fresh dairy products with the people in Ainkawa.